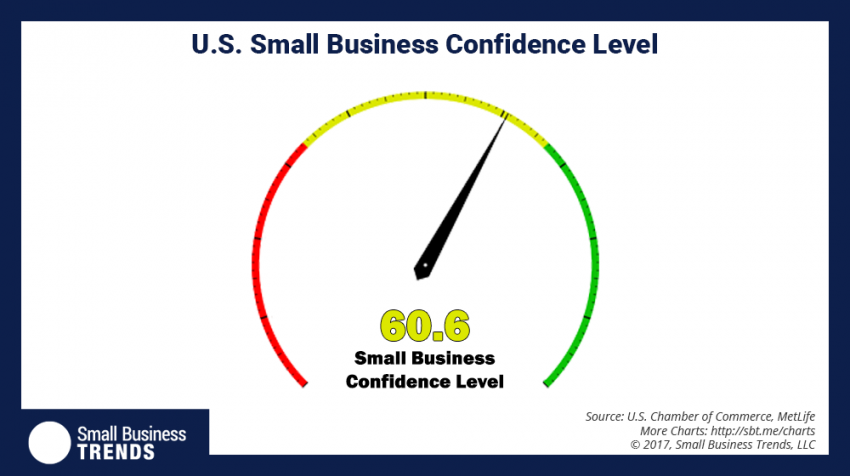 Even in the face of economic uncertainty, small businesses are looking at 2017 as a year to grow.

According to the first ever Small Business Index from the U.S. Chamber of Commerce and MetLife (NYSE:MET), a majority of small businesses are expecting revenue growth this year. And 1 in 3 expect to hire someone for a new job.

Conversely, only 9 percent of small businesses are seeing revenues decrease over the coming year. And 6 percent are planning to cut at least one job.

The Small Business Index finds that this growth is coming at the expense of time. At least 3 in 10 small business owners surveyed say they expect to work more this year than last.

Still, the numbers translate into a positive sentiment.

“The south was the most optimistic followed by the west,” he said in an interview with Small Business Trends.

Even the positive feeling for local economies was high at over 40 percent positive.

However only 33 percent of small business owners felt the national economy was in good shape with 25 percent saying they felt it was in poor health. Suzanne Clark, senior executive vice president at the U.S. Chamber of Commerce, explains the finding.

“I think the closer people are to the things they can control like their business and their local economy, the more optimistic they are,” she said.

Although the overall prognosis for small businesses was good, finding highly skilled staff continues to be an issue. In fact, a full 25 percent say the quality of those applying to positions is poor. Key sectors of the economy also have low numbers with just 27 percent of manufacturers and 26 percent of retail businesses reported getting results they were happy with.

“There’s an under reported story that one quarter of small business owner says they can’t find the right kind of talent,” said Clark. “This story about jobs without people is real and it’s out there.”  She went on to say the need cuts across a wide swath and not all the vacancies require a college degree.

The Small Business Index was based on telephone interviews with 1000 small businesses in April 2017.  According to Reid, there were several targeted areas in this first survey that helped to paint the overall picture.

“The survey asked ten questions broken down into three areas: small business operations, the environment they work in and their expectations.”

The survey also found that 76 percent of small businesses believe the competition they face has been consistent over the last six months.