98 Percent of WannaCry Hacks Were on Windows 7 Computers 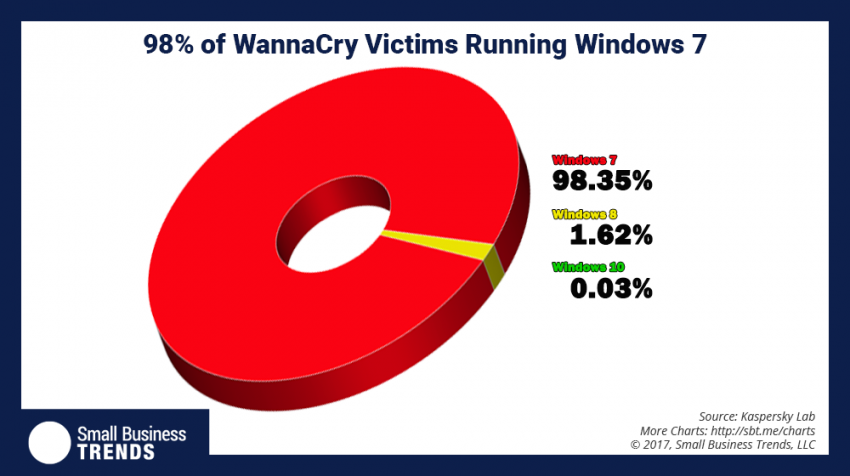 The WannaCry (or WannaCrypt) ransomware hack that impacted businesses worldwide was most successful on Windows 7 computers.

It was believed that computers running older systems were most vulnerable to the ransomware attack. That turned attention to systems like Windows XP and Vista, still in use on a large number of computers today.

But data from Kaspersky Lab disputes that. Instead, it was computers running Windows 7.

Overall, 98.4 percent of the successful WannaCry attacks were on computers running some version of Windows 7.

The most hacked version of that system was Windows 7 x64. Just more than 60 percent of the attacks were on computers running this system. Second on the list was the standard version of Windows 7 (31.7 percent). Other variations of Windows 7 accounted for about 6 percent more.

Variations of the infamous Windows 8 system accounted for another 1 percent or more of the hacks. Windows XP computers were largely unaffected, according to the Kaspersky data.

That doesn’t mean these computers and other systems aren’t vulnerable to future hacks. Kaspersky says that the Trojan ransomware WannaCry caused problems for businesses in places that matter most. Point-of-sale systems and vending machines were impacted.

This means it’s critical to update computers of all kinds that run the systems that keep your business operating. And it could be in places you’d least expect.

Kaspersky shares some examples of businesses embarrassingly impacted by the WannaCry attack. Check out this building lobby info screen in Canada:

Wow, even in my building lobby! #WannaCry #ransomware pic.twitter.com/ilPqHBmiB5

The Most Popular Operating Systems Today

WannaCry went after the most popular operating system in use today. According to data from NetMarketShare.com, Windows 7 is run on almost half of all computers (48.5 percent).

So, it makes sense that hackers armed with WannaCry attacked that system and since it’s older, it’s likely not updated regularly.

Windows 10 is running on more than 1 in 4 computers and Windows XP is just ahead of Windows 8 in active users. Those systems run on about 7 percent of computers each.