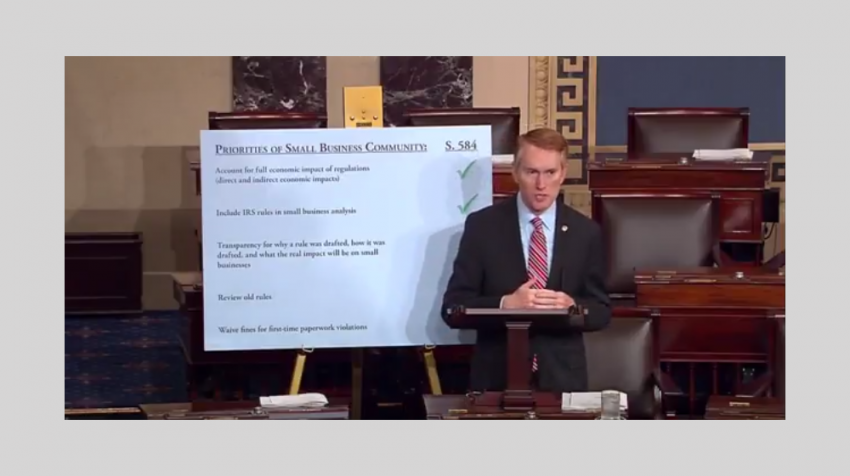 Is Washington really listening to small businesses? U.S. Sen. James Lankford was on Capital Hill recently talking to colleagues about the challenges these small businesses face thanks to government regulation.

Lankford recently introduced the Small Business Regulatory Flexibility Improvements Act. It has since passed through the committee stage.

What is the Small Business Regulatory Flexibility Improvements Act?

Basically, the bill aims to close loopholes in the Regulatory Flexibility Act, which passed in 1980. The bill was initially designed to help small businesses, but Lankford says that it has so many loopholes itself that the goal sort of gets lost in the shuffle.

More specifically, the new bill aims to account for the actual economic impact of business regulations. So when government entities are considering new regulations for businesses, they would have to account for not just direct costs but indirect costs, like electricity use or the cost of additional state requirements that come with the regulation.

The bill would also require the IRS to engage with small businesses before creating new regulations. So instead of small businesses having to employ compliance officers just to keep up with changing rules, they could actually have a say in the tax rules that come to pass. The bill also aims to increase transparency in the rulemaking process so that businesses aren’t blindsided by new regulations.

But it’s not just new rules that often hurt small businesses. There are also plenty of outdated regulations that put small businesses into difficult situations. So the new law would require lawmakers to reevaluate regulations after 10 years to make sure they are still relevant and necessary.

And finally, the bill would offer first-time forgiveness for paperwork violations by small businesses. This obviously wouldn’t apply to things like health and safety issues. But if it’s just a simple paperwork mistake, small businesses wouldn’t have to worry about paying exorbitant fees for first-time offenses.

“This is not a bill I came up with on my own. It is a bill that was drafted in direct response to small businesses and small business leaders around the country. It has been discussed for a long time but for whatever reason it has never been passed,” Lankford explains.

Lankford says he is hopeful that lawmakers in Washington will put aside differences and assist small businesses beginning with passage of the bill.