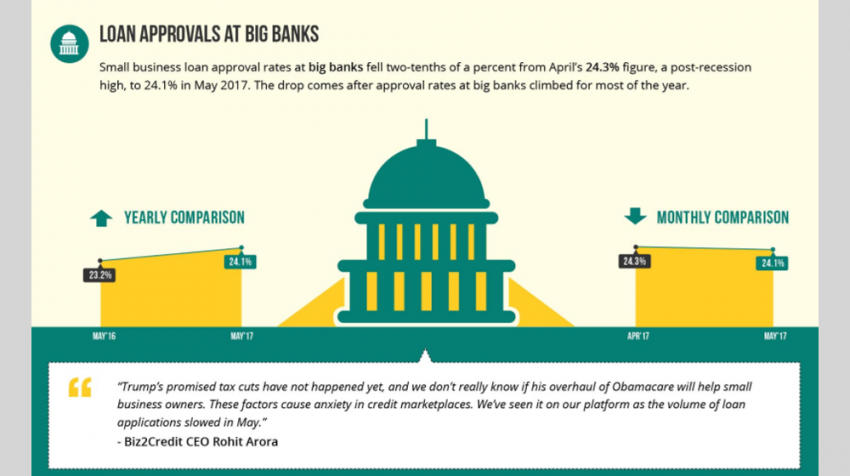 May turned out to be a tough month for small businesses seeking funds.

The newly published report reveals approval rates at big banks fell two-tenths of a percent from April’s 24.3 percent figure, a post-recession high, to 24.1 percent in May.

It’s worth noting the decline comes after approval rates at big banks rose for most of the year.

Small banks were no different, with approval rates dropping to 48.8 percent, down from April’s 49 percent figure.

Biz2Credit CEO Rohit Arora explained, “Small banks are approving almost half of their business funding requests. The demand for SBA-backed loans in the marketplace remains strong. As SBA loans are popular with both borrowers and lenders.”

Approval rates at credit unions continued to fall, dropping one-tenth of a percent in May to 40.5 percent. This marked another new low for this category.

Arora remarked, “Their volume is low, and they are becoming less relevant in small business lending. I don’t see this changing any time soon.”

Approval rates dropped at alternative lenders as well, declining by two-tenths of a percent in May, as non-bank lenders granted 57.7% of the funding requests.

It also marked the fifth time in the past six months that this category of lenders reported an increase in funding approval percentages.

“The U.S. dollar remains strong against the euro, the British pound, and other international currencies. For this reason, foreign investors continue to look for high yields from America’s small business credit marketplace,” said Arora.

Biz2Credit’s May 2017 edition of its report analyzes the results of more than 1,000 small business loan applications.