Microsoft Dictate Types While You Talk 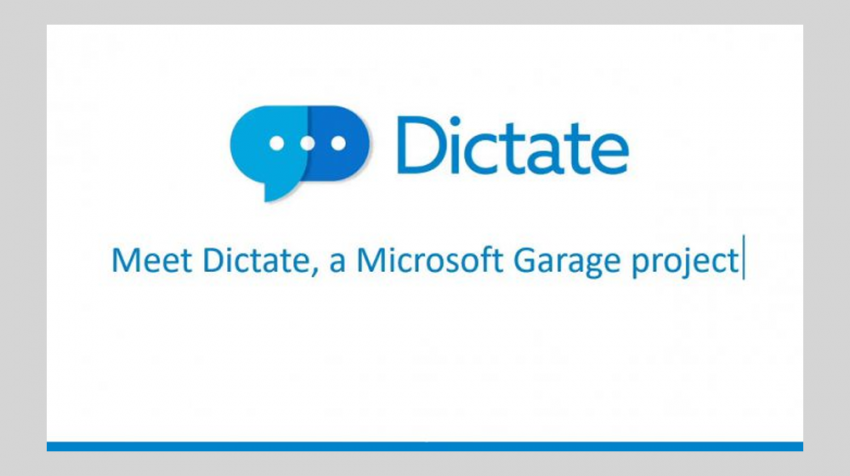 If there is one word synonymous with digital technology, it is efficiency. And the folks at Microsoft Garage have released a new tool which will make you more efficient over typing on a keyboard, Dictate.

As the name implies, Dictate is an add-in designed to convert speech to text by letting you speak what you need to type. On the company blog, Microsoft (NASDAQ:MSFT) announced this is a new project from Garage, a resource to Microsoft employees supporting and encouraging problem solving.

What are the Benefits of Speech Recognition?

Whether you are a small business owner, freelancer, entrepreneur or anyone else spending hours every day on a computer, speech recognition has many benefits. Writing documents or emails, texting instant messages and creating presentations are some of the tasks users perform on Word, Outlook and Power Point.

Now imagine not having to type. And even if you are a fast typist, a study conducted by Stanford University concludes you can till likely dictate three times faster.

So Dictate, if it performs as advertized, will likely  make you more productive because you can get things done much faster, and you won’t need a transcription service.

For those with disabilities, the benefits are even more remarkable. Amputations, vision impairment, dyslexia, Repetitive Strain Injury (RSI), and arthritis are some of the condition that greatly limit the ability to type effectively. Dictate can give this group a viable alternative.

To install Dictate, go to Dictate.ms and download the 32 or 64 bit version. Once loaded, it will show as Dictation on Word, Outlook or Power Point.

The app has a very easy user interface with few but useful functionalities. Click on the mic icon to start dictating, with commands such as create new lines, delete, add punctuation and more. You can find more commands on the home page.

If you need to transcribe your dictation in another language, you have more than 20 choices, with translation support for up to 60 languages.