Small Businesses in the Midwest Are in Hiring Mode, Others – Not So Much 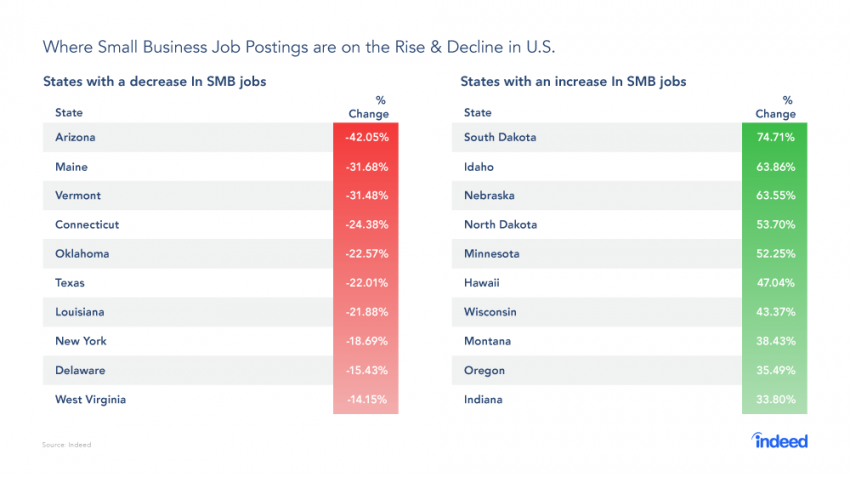 New data from the job site Indeed.com finds small businesses in Midwestern and Northern states are adding considerably more employees than other states. Some are also adding less, compared to data from three years ago.

South Dakota, Idaho, and Nebraska are the three states with the highest percentage increase of small business jobs over the last three years. Indeed looked at job listings from small businesses — with 200 or fewer employees — and compared the totals from the first quarters of 2014 and 2017.

In South Dakota, alone, the amount of small business jobs posted on Indeed rose nearly 75 percent since 2014. Idaho and Nebraska each saw about 64 percent increases. North Dakota (54 percent), Minnesota (52 percent), Wisconsin (43 percent), and Montana (38 percent) also made the top 10 in this list from Indeed.

Hawaii, Oregon, and Indiana also cracked the top 10 in small business jobs gains over the last three years, according to the information from Indeed.

“We are seeing a trend in which small businesses in northern and Midwestern states are increasing their need for employees,” says Paul Wolfe, head of HR for Indeed.com, “while the number of SMB job postings in the Sun Belt and northeast are decreasing.”

Arizona is truly a desert for small business jobs. The number available at small businesses compared to three years ago has dropped 42 percent.

Why Are Jobs Hot Where the Weather’s Not?

Jobs appear to be increasing at small businesses located in states where it’s not as expensive to live. This means small businesses can offer more competitive wage jobs because a prospective employee’s earnings will go further.

Not every small business can pick up and move to one of these states. Before you decide on a location for your business, consider the local economy. To grow, you’ll have to add employees and pay them. It’s more difficult to attract the talent to grow if your wages just don’t stack up against bigger companies — and other local competitors.