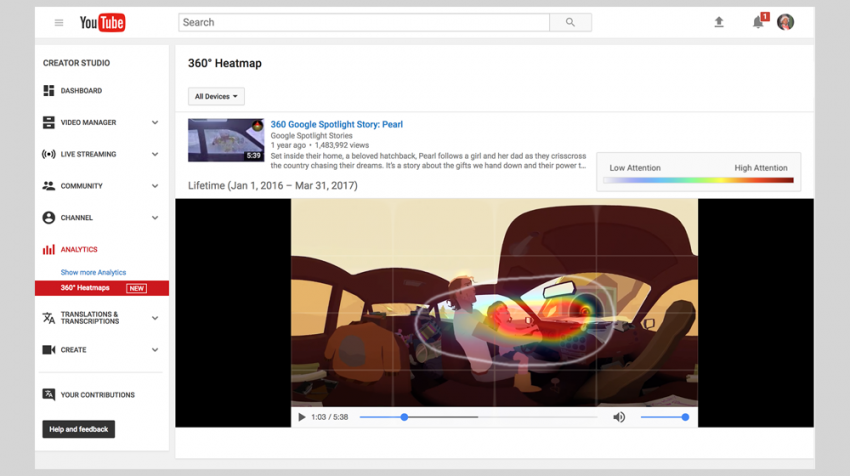 YouTube recently introduced heatmaps for virtual reality (VR) videos with over 1,000 views. The Google-owned video site said the heatmaps will give you specific insight into how your viewers are engaging with videos created in VR.

“With heatmaps, you’ll be able to see exactly what parts of your video are catching a viewer’s attention and how long they’re looking at a specific part of the video,” wrote Frank Rodriguez, a Product Manager at YouTube, in a post announcing the new tool on the YouTube Creators Blog.

Small businesses looking to share new and unique experiences with their audience can take advantage of the emerging VR technology and start creating immersive videos in VR their audience will appreciate.

Check out this video on how to make a simple VR/360-degree video from your smartphone for YouTube:

For those businesses that want to go all in on VR and hone their skills, YouTube says it’s helpful to know how your viewers interact with these videos. The video-sharing site used its new heatmaps tool to conduct some early research on what makes an engaging VR video.

Apparently, people spend 75 percent of their time looking straight ahead (within the front 90 degrees) of a VR video. So when creating videos in VR, spend significant time on what’s in front of the viewer.

While a lot of time is spent focusing on what’s in front, people view more of the full 360-degree space with almost 20 percent of views actually being behind them. The more engaging the full scene is, the more likely viewers will want to explore the full 360-degree view, said Rodriguez. So don’t forget to use markers and animations to draw attention to different parts of the scene.

The context in which people are viewing VR videos matters too, added Rodriguez. Some might be watching on a mobile and portable Cardboard, while others are watching on a desktop computer. Make sure to give your viewers a few seconds before jumping into the action.

It’s worth mentioning it is still early days in VR. Only five percent of people in North America own a virtual reality headset overall. But VR adoption is growing — albeit slowly. Small businesses are already utilizing the technology to hold VR conferencing and also immerse customers in VR business events.