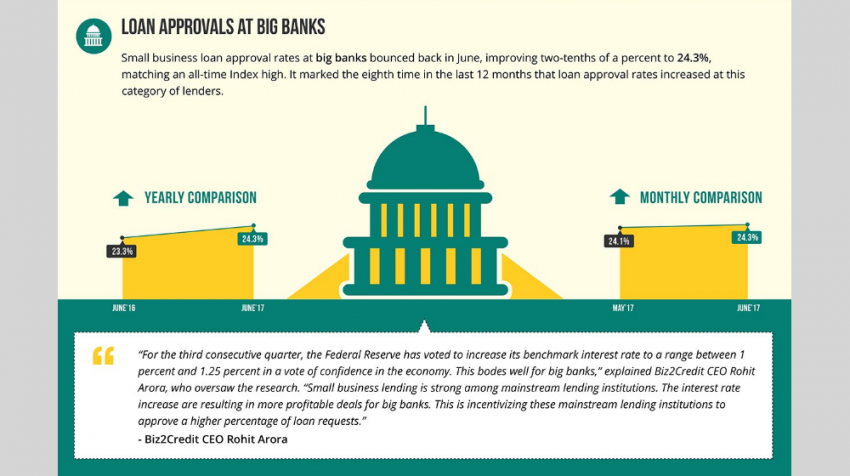 According to the latest Biz2Credit Small Business Lending Index, loan approval rates at big banks improved two-tenths of a percent to 24.3 percent, matching an all-time index high. Significantly, this marked the eighth time in the last 12 months that loan approval rates improved at this category of lenders.

“For the third consecutive quarter, the Federal Reserve has voted to increase its benchmark interest rate to a range between 1 percent and 1.25 percent in a vote of confidence in the economy. This bodes well for big banks,” explained Biz2Credit CEO Rohit Arora, who oversaw the research.

Small banks approved 48.7 percent of the funding requests they received in June, down from May’s 48.8 percent. This marked the second consecutive month loan approval rates dropped in this category of lenders.

“Despite this small dip, small banks are a good source for small business funding, particularly for SBA-backed loans,” said Arora, an expert in small business finance. “Small banks have not crossed the 50 percent threshold.”

However, the percentage marks an all-time high for Biz2Credit’s Index, continuing an 11-month streak of neutral or positive gains in loan approval rates.

“The Fed has expressed its confidence in the U.S. economy as the dollar remains strong on global markets, which dictates strong interest from international players in the space,” said Arora. “This has resulted in more loans being granted from international investors as the category of lenders continues to revolutionize lending.”

Biz2Credit’s June 2017 edition of its report analyzes the results of more than 1,000 small business loan applications.