Influence Redefined Shows the Relationship Between Communication and Leadership

"Influence Redefined: Be the Leader You Were Meant to Be, Monday to Monday" is a guide to influential communication at whatever level of leadership that you find yourself. You don't have to be an Oprah Winfrey, Steve Jobs, or Mark Zuckerberg to make a lasting impact, you just have to understand the principles that help you make the most memorable impression. 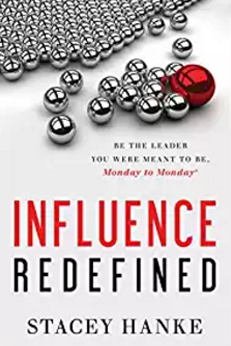 Good leaders inspire. Amazing leaders develop a following. Amazing leaders are the subjects of countless biographies and headlines: Steve Jobs, Richard Branson and Oprah Winfrey. Others hold onto their every word because we want something they have. They want their power to influence, whether they are seeking to get a new job or get a new customer. Influence Redefined: Be the Leader You Were Meant to Be, Monday to Monday is a guide to understanding how influence works and how you can cultivate it on a consistent (and steadily growing) basis.

What is Influence Redefined About?

The premise of Influence Redefined is that most of leaders (and others) overestimate their influence on others. As a result, they tend to underestimate the amount of work going into creating influence. Part of this stems from the lack of clarity on the concept of “influence”. Influence Redefined makes it simple. Influence is the ability to get someone to act in a certain way, even when you’re not around. Influence is the key way leaders achieve their goals even when they are not actually around.

They also tend to make other bad assumptions about influence. They tend to link influence to formal titles in an organizational chart. They believe influence is something they can “turn on” when they need it. Influence Redefined would disagree with this on both accounts. Influence, as author Stacey Hanke sees it, doesn’t reside in formal titles and it is something affected by day-to-day habits, particularly how you communicate with others. If you can improve the way you communicate in your daily interactions, you improve your ability to influence others — or so the rationale goes.

Improving your communication skills requires more than taking a speech or writing class. It involves getting constructive feedback and practice (especially in a videotaped session) with deliberate practice in specific areas of communication. Everyone has communication habits detracting from the ability to influence (such as fidgeting or repeating the phrase “um” or “like”) even if it is completely unconscious. People also tend to heavily focus on the message in communication, not the delivery. As a result, they believe they’re already good communicators simply because they communicate. Influence Redefined helps readers break out of their ego-driven illusions about their influence and into a more powerful and proactive reality.

Hanke is a communications coach, author, and keynote speaker who launched her own company, Stacey Hanke, Inc. in 2004. Hanke has a wide array of experiences in the communications industry including winning the National Speaker’s Association’s “Top 6 Under 40”, appearing on WGN Chicago and the Lifetime Network, as well as emceeing a TEDx event. She also happens to be a certified fitness instructor.

What Was Best About Influence Redefined?

The best part of Influence Redefined is the connection Hanke makes between communication and influence. This is a key factor in a speaker’s “presence” that many communication books often miss. Hanke argues presence isn’t some vague concept with which some people are gifted. It is built daily in the way you communicate with the people around you. This gives readers an opportunity to develop their presence in a strategic way. It also moves the excessive focus in communications training from the message to delivery of that message.

Influence Redefined provides a radically different (and more proactive) definition of “influence” and a pathway for readers to improve their influence-generating skills on their own. The book’s recommendations (including mastermind groups, videotaping sessions) only provide a glimpse of the potential areas where readers can seek improvement. For many readers, this might be enough. Other readers, however, may need more help tying the book’s recommendations into a day-to-day plan.

Have you ever perceived that your communication isn’t having the impact that it should? Is your leadership inspiring your team to reach a new level of success? If not, then Influence Redefined offers the reflective process and strategies you need to begin. Focusing on actions every single person at work engages in every single day, Influence Refined helps readers understand and leverage the same principles that drive the influential communication of the world’s top business leaders.

Charles Franklin is a Book Reviewer for Small Business Trends. He has a background as a professional reviewer, and is also a content provider and customer relations professional.
2 Reactions
Subscribe
Follow @smallbiztrends
RSS LinkedIn Pinterest iTunes