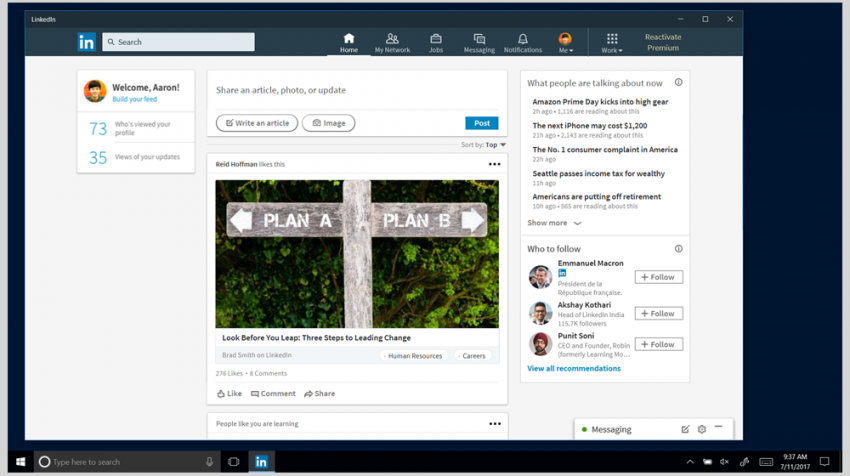 “Every month millions of professionals around the world access LinkedIn using a web browser on Windows 10,” said LinkedIn’s Product Manager Hermes Alvarez. “We want to give these members more options for how they connect with their professional world, so today we’re excited to share that we are starting to roll out our LinkedIn app for Windows 10. With our new desktop application, Windows 10 users can enjoy a richer, more engaging and connected LinkedIn experience.”

The app includes features such as real-time notifications on updates and new messages from LinkedIn connections, as well as news and information on who has been viewing your profile.

Notifications can be managed within the LinkedIn app, so you don’t have to worry about being spammed with pop-ups.

Microsoft (NASDAQ:MSFT) first announced its plan to acquire LinkedIn for $196 per share in an all-cash transaction valued at $26.2 billion in June 2016.

Microsoft finalized its $26.2 billion acquisition of LinkedIn in December 2016. The company has expressed its intentions to bring LinkedIn identity to Microsoft’s productivity applications, like Outlook and Office as well as introducing LinkedIn notifications in the Windows Action Center, among other things. It looks like Microsoft is already making strides to achieve the latter with the launch of the Windows 10 application.

The LinkedIn Windows 10 app will be available to all LinkedIn markets by the end of July.