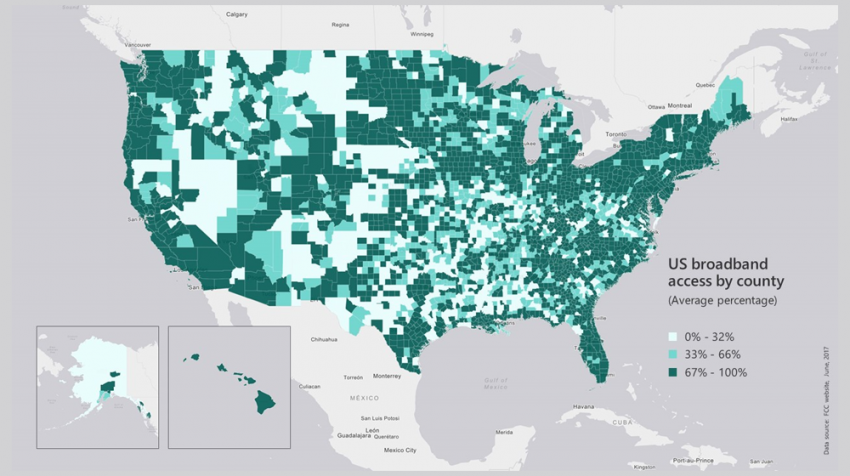 “New cloud services are making broadband a necessity to start and grow a small business and take advantage of advances in agriculture, telemedicine and education,” wrote Brad Smith, President and Chief Legal Officer at Microsoft, in a post announcing the new initiative on the company’s official blog. “In short, broadband has become a vital part of 21st century infrastructure.”

The tech giant said it will invest in the upfront capital projects needed to expand broadband coverage in rural communities. Microsoft says it will also seek a revenue share from internet operators to recoup its investment. The company then plans to use these revenue proceeds to invest in additional projects to expand coverage further.

“The time is right for the nation to set a clear and ambitious but achievable goal — to eliminate the rural broadband gap within the next five years by July 4, 2022,” wrote Smith. “We believe the nation can bring broadband coverage to rural America in this timeframe, based on a new strategic approach that combines private sector capital investments focused on expanding broadband coverage through new technologies, coupled with targeted and affordable public-sector support.”

Microsoft’s Rural Airband Initiative will reportedly invest in partnerships with telecom companies. It focuses on the specific goal of bringing internet connectivity to at least two million people in rural America by 2022.

The project will rely on a mixture of new and alternative broadband technologies like TV white spaces, satellite coverage, and fixed wireless. The estimated total capital and initial operating cost to eliminate the rural broadband gap falls into a range of $8 to $12 billion. This is roughly 80 percent less than the cost of using fiber cables alone. The approach is also over 50 percent cheaper than the cost of current fixed wireless technology like 4G, according to Redmond, Washington-based tech giant.

“We’re confident that this approach [involving a mixed model for expanding broadband coverage] is good for the country and even for our business. After all, if 23 million additional customers can access the internet at broadband speeds, every tech company in America will benefit,” added Smith.

As another part of the initiative, Microsoft Philanthropies, the company’s chariable arm, will train people on the new technology to improve education, health care and agriculture, in addition to improvements in rural small businesses.

Fast internet connectivity will link small town businesses to new, larger markets and significantly boost revenue. This can all be achieved while also allowing you and your small business staff to enjoy a lower standard of living in your small town or rural community.

Microsoft, working together with its partners, said it plans to have 12 rural broadband projects up and running in 12 states in the next 12 months, including in Arizona, Georgia, Kansas, Maine, Michigan, New York, North Dakota, South Dakota, Texas, Virginia, Washington, and Wisconsin.