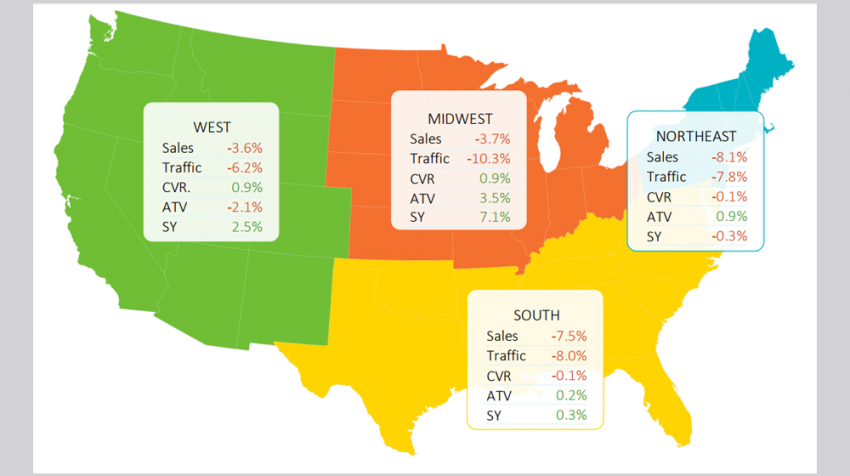 RetailNext, a provider of in-store analytics, recently announced the latest Retail Performance Pulse year-over-year report for June 2017. It shows Father’s Day, which landed on Sunday — June 18, 2017 vs. June 19, 2016 — wasn’t enough to lift the month. Sales for June fell 8.1 percent with an 8.3 percent decline in traffic as compared to one year ago. Transactions were also down 7.3 percent in June.

According to the monthly benchmark report that aggregates millions of retail performance data points to give a “pulse” on the industry, June traffic declines were consistent between 7 percent and 10 percent each week. Meanwhile sales experienced more variation in its weekly declines.

While Father’s Day wasn’t enough to lift the month, it did carry the month, with the busiest and best shopping day being Saturday, June 17. Father’s Day led the way in sales, traffic, shopper yield and transactions. The holiday helped lift conversion for the month up 0.5 points and contributed to a 0.1 percent lift in shopper yield (sales per shopper) in June.

After a slight reprieve in May, the RetailNext Retail Performance Pulse June 2017 report shows a worrying downward trend in sales and traffic metrics continuing on par with results seen in March and April. Retailers, including small business owners, will want to keep this information in mind because it can help with planning future marketing efforts. And that includes franchises, too.

Data for RetailNext’s report, providing an overview of brick-and-mortar store performance for the month of June 2017, was collected between May 28 and July 1. The report analyzed over 10 million shopping trips to specialty and larger format retail stores across the U.S. The results allow store performance benchmarking, financial forecasting and trend analysis across traffic, sales and conversion metrics.