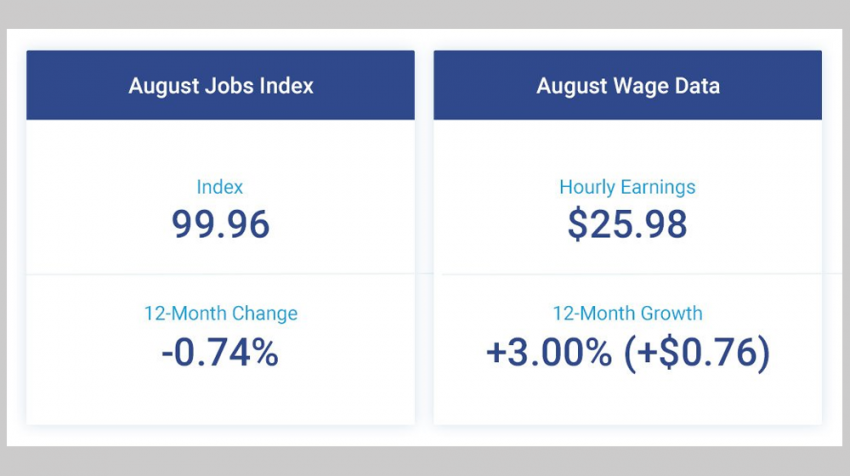 Small business job growth in the U.S. has slowed for the sixth straight month as wages for these jobs continues to rise. That’s according to the latest Paychex | IHS Small Business Employment Watch for August.

The Small Business Jobs Index did show a slight dip that was negligible. The index across the country declined 0.02 percent from July and less than 1 percent (0.74) from 2016.

It registered at 99.96, just below the break even benchmark for job growth of 100. That’s down 0.38 percent during the past quarter.

Wages at small business jobs across the country continue to go up, however. They went from $25.90 in July to $25.98 in August. That represents a growth rate of 3 percent over last year. Hourly wages are gaining momentum this year. The actual growth rate rose from 2.74 percent in January to 2.94 percent last month.

James Diffley, chief regional economist at IHS Markit, was quoted as saying the numbers signal a trend a not a one off reading although he didn’t say how long it expected it to continue for.

Job and wage growth are varied depending which part of the country you live in. For example, the South is out front nationally when it comes to employment growth. By sector, construction took second place by industry when it came to job growth in August.

The West takes the lead in wage growth. This trend continues on from July.  Narrowing the statistics down to the state level, Tennessee leads in job growth while Arizona takes top spot for yearly hourly wage growth.Their hourly earnings growth was 5.24%. The average nationally was 3 percent.

Martin Mucci, is the Paychex president and CEO. He feels the numbers are an indication of an overall healthy small business sector.

The numbers by city reflect the same picture. The small business job growth in Dallas was reported at 0.60 percent in August. That meant they jumped above the growth benchmark to 102.23 to retain their title as the number one ranked metro.

Thee were other areas where there were big improvement at the city level. For example, Philadelphia’s ranking  increased 1.19 percent and moved up a full 13 spots to give them the second rank on the metro index.

The report uses payroll information from a subset of Paychex clients. The baseline of 100 is used a a marker to judge small business health. It represents moderate jobs and/or wage gains. It was was set in 2004.