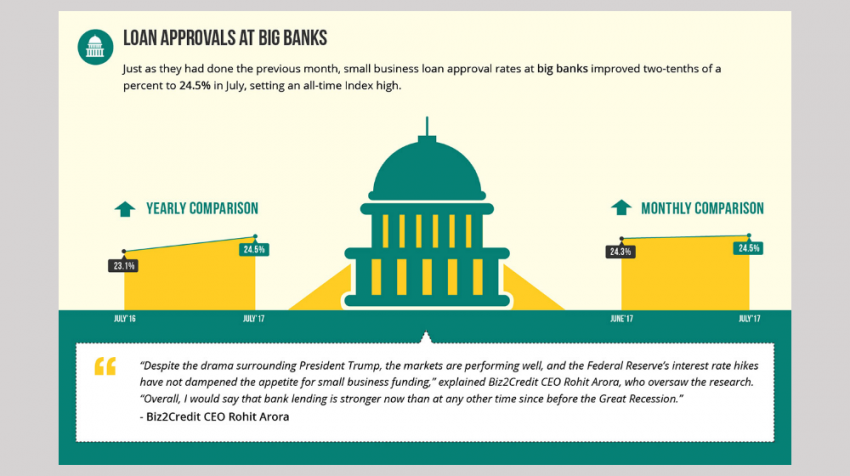 So what led to this sharp improvement in small business lending at banks? According to Biz2Credit CEO Rohit Arora, who oversaw the research, the markets are performing well which is increasing the appetite for small business funding.

“Overall, I would say that bank lending is stronger now than at any other time since before the Great Recession,” he said.

Meanwhile, approvals by institutional lenders who have seen constant growth in the small business lending marketplace, approved 63.9 percent of requests, marking a new high on the index.

“The dollar is strong, the Dow Jones reached a new high, and the U.S. economy is solid. These factors are attractive for global investors, and they see opportunity in the small business lending space,” commented Arora.

Approvals by alternative lenders, on the other hand, declined sharply. In July, approval rates declined three-tenths of a percent to 57.2 percent.

“Alternative lenders do play a key role in small business lending. They are a source of funding for borrowers who have had some financial difficulties or perhaps have little to no credit history at all,” Arora explained.

As for credit unions, approval rates remained at 40.4 percent for the second consecutive month.

For the report, Biz2Credit analyzed loan requests ranging from $25,000 to $3 million from companies in business more than two years with an average credit score above 680.