The Latest Trend: Management by Misdirection? 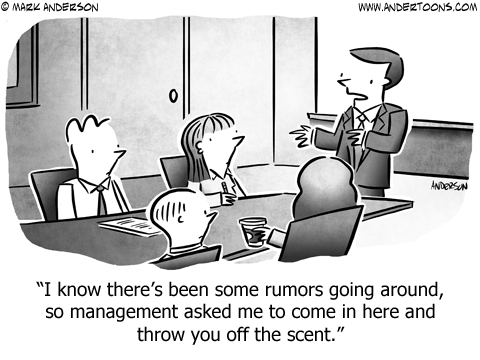 Although I worked in the traditional business world for years, I don’t carry around a lot of memories of my time there. I don’t know if it’s an optimistic outlook or just blocking out the bad stuff, but I’ve just come to accept it. Still, I do remember a handful of situations quite clearly and this cartoon alludes to one.

It was common knowledge in a particular office that our manager was having an affair with their manager. Although they tried to hide it, they just weren’t very stealthy and it was plainly public.

So, of course, office gossip followed and, of course, that gossip found its way back to the canoodling couple.

What followed was a series of meetings with the staff involving shouting and crying and threatening and explaining that left everyone clearly informed that this affair was officially NOT A THING.

Then, three months later one manager quit, the other got divorced, and an engagement was announced.

Listen, I hope everyone ended up happy, and to each their own, but I couldn’t help but think back to those meetings when I was writing this cartoon.