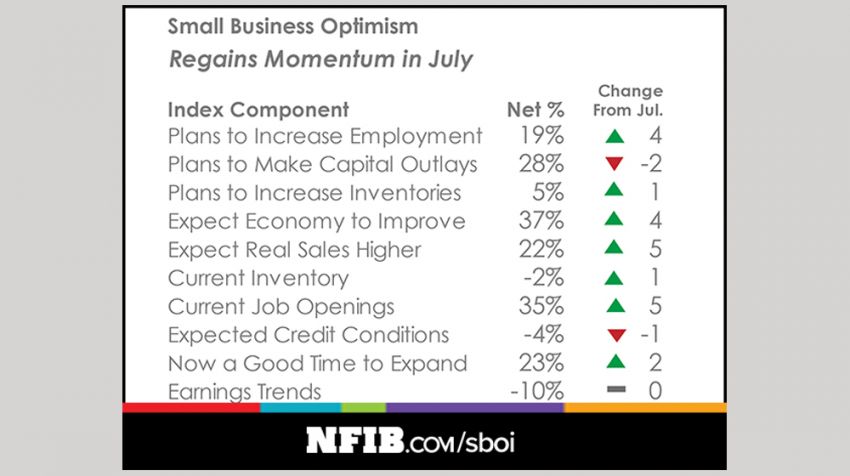 Small business owners are also feeling optimistic about the economy because their customers are feeling optimistic about the economy. The U.S. economy (GDP) grew by about 2.6 percent in the second quarter of the year, a positive sign that Americans are opening up their wallets as per an NPR report. NFIB stresses this growth — and optimism — among small business owners is largely attributable to increased consumer spending.

“There’s nothing like more customers to make owners happy, and optimism held up as did important measures of spending and hiring plans,” wrote NFIB in a post on the company’s blog.

Main Street has also preserved the surge in optimism that started the day after the U.S. election thanks to stronger customer demand. In the past three months more small business owners have reported higher nominal sales compared to the prior three months, representing a 4 point improvement over June.

Overall, NFIB’s data shows seven of the 10 Index components posted a gain, while two declined. One was unchanged. 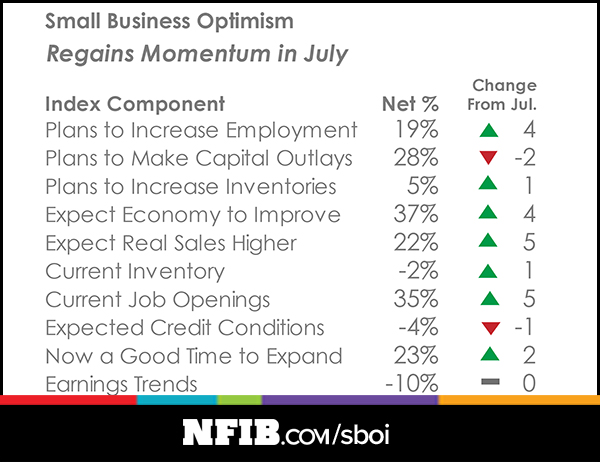 It’s true sixty percent of all small business owners reported hiring or trying to hire in July (up 6 points). However, a whopping 87 percent of those owners said they had a tough time finding qualified applicants for the positions they were trying to fill.

“The labor market is getting very tight, and the problem is most severe in the construction and manufacturing sectors,” said Bill Dunkelberg, NFIB Chief Economist in a quote from the report.

Moreover, small business owners showed declined enthusiasm for laying out capital expenditure plans possibly because they are still waiting to see what business-friendly policies come out of Washington.