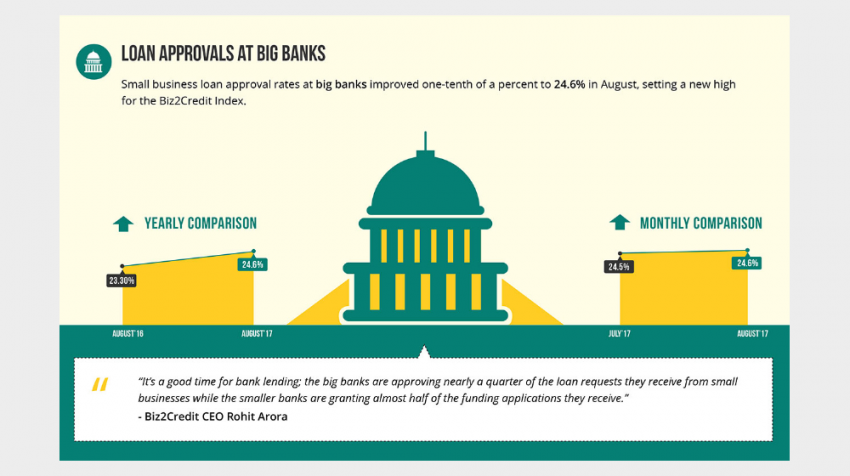 According to the latest Biz2Credit Small Business Lending Index, a monthly analysis of loan approval rates, approval rates at big banks improved one-tenth of a percent to 24.6 percent in August, a new high on the index.

Biz2Credit CEO Rohit Arora said, “It’s a good time for bank lending; the big banks are approving nearly a quarter of the loan requests they receive from small businesses while the smaller banks are granting almost half of the funding applications they receive.”

Meanwhile, alternative lenders saw a decline in small business lending again. Approval rates declined one-tenth of a percent in August to 57.1 percent. Notably, approval percentages have declined every month for more than a year now.

“Alternative lenders still are players in small business lending because they are willing to provide funding for borrowers who have less than stellar credit or little credit history at all,” Arora explained. “Since they accept higher risk by funding borrowers who do not have stellar credit histories, alternative lenders charge at a higher cost of capital.”

Along similar lines, loan approval rates at credit unions dipped to 40.3 percent, hitting a new low for this category on the index.

For the report, Biz2Credit analyzed loan requests ranging from $25,000 to $3 million from companies in business more than two years with an average credit score above 680.