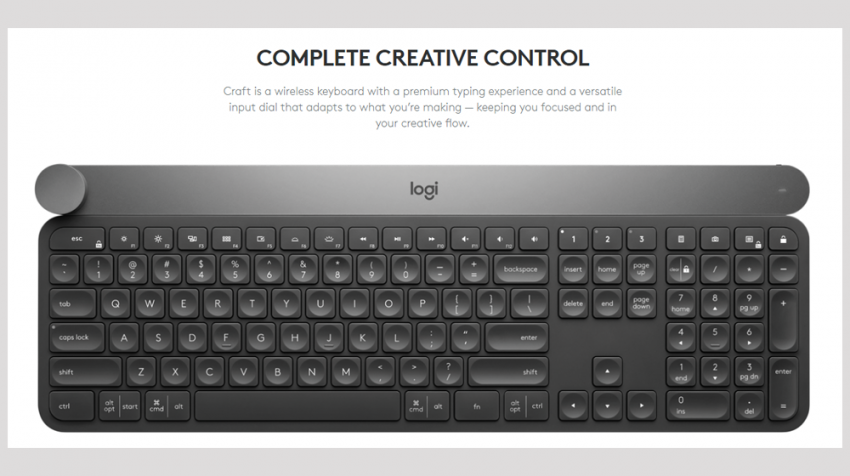 Logitech (NASDAQ:LOGI) has introduced a new flagship keyboard that features a creative input dial, which should grab the attention of small businesses users who do video editing, use Photoshop and more.

Small businesses can use the new keyboard to maximize the creative process when working with Adobe Illustrator CC, Adobe Premiere Pro CC, Adobe InDesign CC, Microsoft PowerPoint, and Word. The design, featuring creative input dials and contextual controls, promises to deliver a new level of control, including jumping from tab to tab in a browser.

“The creative input dial gives you instant access to the functions you need, the moment you need them, allowing you to increase your productivity by simply touching the dial,” the company said in a release.

The CRAFT input dial, called the Crown, is a smart aluminum knob that you can touch, turn or tap to adjust contrast and saturation in Adobe Photoshop or adjust image brightness. You can also use the touch-sensitive dial to create and adjust charts in Microsoft Excel with more precision, the company says.

CRAFT wireless keyboard also features smart illumination with backlighting meant to detect your hands and adjusts lighting automatically, depending on the conditions of your room. The keyboard keys are arranged in a full-size familiar layout, with each individual key engineered for stability and precision, the Swiss company with headquarters in Newark, California explained.

“Our new flagship Logitech CRAFT keyboard is for all creators who spend a lot of time designing and creating — who want to work with greater precision and feel connected to their work,” said Art O’Gnimh, global head of keyboards at Logitech in the release.

The CRAFT Advanced Keyboard is designed for both Mac and Windows. It is expected to go on sale in October 2017 at Logitech.com and select retail stores. Initial retail price is $199.99.