Hurricane Irma: My Experience in the Eye of a Hurricane [Watch] 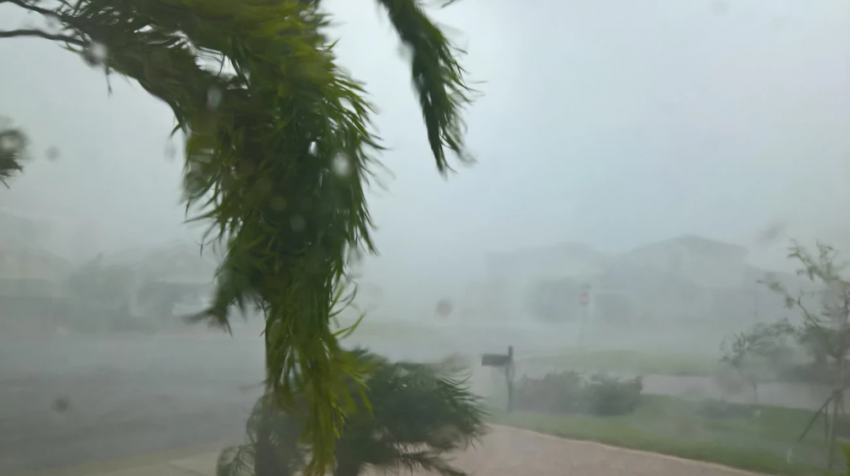 Up until a few days before Hurricane Irma made landfall in the U.S., we thought it would miss us in Naples, Florida. The forecasting models had Irma tracking out in the Atlantic ocean to the east of Florida.

Were those models ever wrong!

Instead, we spent 8 hours in nail-biting anxiety as Hurricane Irma passed directly over our home about 15 miles north of Naples, Florida on Sunday, September 10, 2017.

In the week leading up to Irma’s landfall, we were glued to the local weather forecasts. At first we were only mildly concerned. We worried for those on the east coast of Florida but didn’t think we were in the direct path on the west coast.

As each day went by, the models shifted east, then west, then back again. Irma was a category 5, the strongest level, when it devastated the Caribbean earlier in the week.

We knew then it was a monster.

Hour by hour, residents and business owners got deeper into preparations.

Neighbors started shuttering their homes. The typical aluminum shutters must be bolted over windows and doors. They can take many hours to install, so people start early. Services that put storm shutters are overloaded. In order to get on the installer’s schedule, people had to be shuttered as much as a week ahead. And live in dark houses.

Our neighbors a few doors over decided to take an unplanned vacation to Germany to avoid Irma. Another neighboring family ended up driving to Alabama, where they were able to find hotel rooms far enough out of the expected path. Others packed up their cars and traveled to relatives’ homes farther north.

Still others decided the best option was to stay.

Concerned friends and relatives from up north checked in nonstop, urging us to evacuate.

We came to hate those hurricane spaghetti models. Only the European model ended up being accurate.

By Wednesday flights were all booked. In fact, airlines were cancelling flights right and left. Leaving on a plane was out of the question.

We considered evacuating by car. However, by Wednesday the gas stations were running out of gas.

Florida is a long skinny state. You have to drive 400 miles from the foot of the state just to get out of it. And there are only two north-south interstates, I-95 on the west coast and I-75 on the east coast. Millions of people were evacuating on those roads. The thought of getting in a car with the Small Biz Cat, and running out of gas along the way in a giant traffic jam, seemed like a bad idea. Hunkering down looked better.

By Thursday before Irma, all schools were closed. And businesses started notifying customers that they would be closed either by the end of Thursday, or Friday morning. We got text notifications from several small businesses we frequent. The owners had wisely decided it was time for their employees and them to prepare their own homes and families.

By Saturday morning, everyone knew Irma would hit Naples. We decided we couldn’t listen non-stop to scary weather forecasts. We had prepared as much as we could. So my husband and I made a conscious decision to turn off the weather and news reports urging people to “evacuate NOW” except for a quick check-in once an hour. At that point I couldn’t watch another scary 5-color map showing 15-foot storm surges.

Instead, we played a game of Monopoly with our neighbors. We did last minute preparation such as moving outdoor furniture inside.

That afternoon, things got more real. Shelters were filling up fast, and new ones were literally opening by the hour. Residents in mobile homes, and those nearer to the Everglades and coastal areas were under mandatory evacuation (in my neighborhood, which is about 10 miles inland, we were not). People who had evacuated from the Keys to our coast were now being kicked out of hotels forced to close.

Out of options, people started seeking refuge with friends of friends in other parts of Naples considered safer. Our neighborhood was one of those.

A seasonal neighbor called from out of state asking another neighbor to break into his vacation house to allow friends of friends to shelter there. And we saw three families drive up to another empty neighbor’s house in driving rain and take shelter there. They’d obviously been directed there and had a key.

That was one good thing about a terrible situation — neighbors, friends and acquaintances helping each other.

Later that evening my husband and I tried more distraction. We watched a college football game as winds and rain got heavier. And we texted a bit with Brent Leary, who does our interview series here at Small Business Trends, as we sometimes do during college ball games. We desperately needed a break from 24/7 frightening news.

Sunday, which will forever be known as hurricane day in our house, arrived. That morning we and the cat went over to a neighbor’s house to ride it out. We needed the social interaction and support of others.

Around 10 am on Sunday the power and internet went out. (It stayed out for 8 days.)  Our neighbors had a generator, so they had power but no internet.

Our communications lifeline turned out to be a battery-powered radio. Through it we heard the first reports of Irma’s devastation in the Keys. We listened as Irma traveled north toward the Everglades and then Naples. It unfolded like a car wreck in slow motion. Morbid and scary and something you can’t stop — but you also can’t break away.

The winds and rain steadily worsened. Our neighbors’ metal shutters shutters banged non-stop all day long from the wind.

The eyewall of hurricane Irma passed right over our house which is about 15 miles north of Naples, on Sunday right around 5:00 pm. That was the strongest part of the storm. I took the video above at the height of Irma.

By 5:40 pm, we were in the calm eye of the hurricane. It was just like you hear about on the Weather channel. The eye was utterly calm. No rain. A boy and his dog ran out playing in the street. Other neighbors came out and waded in the rain water flooding the streets.

By then Irma had spent most of her fury. The backside of Irma was nowhere near as ferocious as the front eyewall. The rest was a strong rain storm.  But now the winds were coming from the exact opposite direction.  Instead of coming in from the northeast, the winds now came from the southwest due to the hurricane’s rotation.

Later that evening by around 8:00 pm the worst was over. Or so we thought.

Little did we know, the aftermath would be worse. And it was just beginning.

Check back each day this week for other parts of this 5-part series: