9 Habits of Millionaires Any Entrepreneur Can Adopt (INFOGRAPHIC) 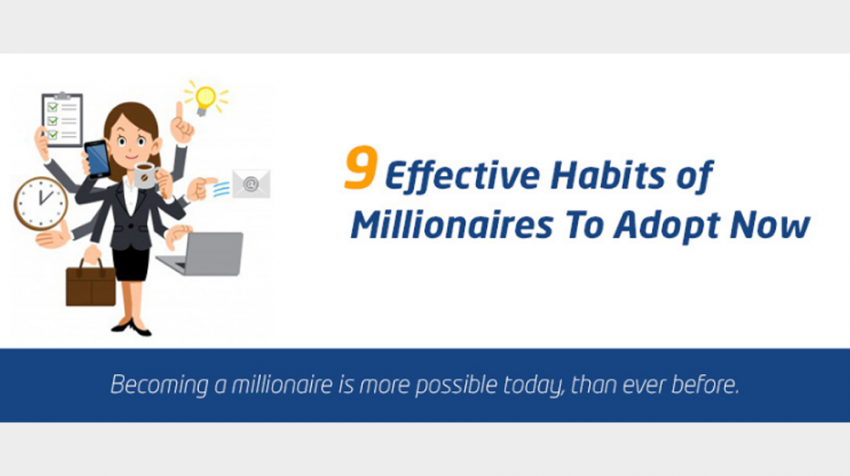 Want to be a millionaire? Who doesn’t, right?

Well, if you believe in emulating those who are successful, this infographic that explores the habits of famous business millionaires may be a good place to start.

Titled, “9 Effective Habits of Millionaires to Adopt Now,” the infographic by Beat The Market Analyzer gives us insights into some very successful individuals.

We’ve all heard, the early bird gets the worm. For Richard Branson, founder of Virgin Group, Jack Dorsey, CEO of Twitter and Square, Tim Cook, CEO of Apple, and Ursula Burns, former CEO of Xerox, it has really paid off. They get up at 5:45, 5:30, 3:45, and 5:15 AM respectively. So before you hit the snooze button tomorrow morning, think of these people.

The next habit is not rocket science, but in today’s always on and connected world you will have to make a concerted effort to make it happen. It comes from Henry Ford, founder of Ford Motor Company. He said, “Thinking is the hardest work there is, which is probably the reason why so few engage in it.”

The infographic says successful people dedicate 15 to 30 minutes a day to distraction-free thinking. It is time to put your smartphone down and come up with your next great idea.

Once you come up with that idea, you have to ‘Define your goal,’ one of the other habits on the list, as it turns out. In addressing this practice, Napoleon Hill, author of Think and Grow Rich, said, “A goal is a dream with a deadline.” Setting goals with clear timelines takes discipline, but whether you fail or succeed, it will show you what you are capable of.

In order to effectively carry out all of these good habits, you need to learn, and reading is one the best ways of doing that. Charlie Munger, Chairman of Berkshire Hathawy, says, “You would be amazed at how much Warren [Buffet] reads — at how much I read.”

According to the infographic, 80 percent of successful people sharpen their skills with 30 minutes of reading and self-improvement a day.

Some of the other important habits on the list include exercising, networking, finding a mentor and following the 80/20 rule of saving.

Check out the infographic below for more details.