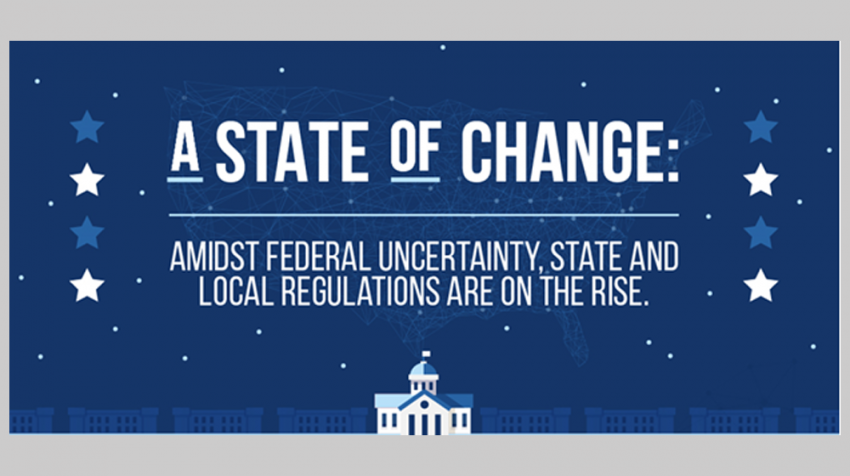 As Donald Trump continues to cut Federal regulations, local and state governments are going the opposite direction by implementing new employer regulations. A new infographic by Paychex highlights five areas where state and local governments are adding layers of regulation on employers.

The Rise of State and Local Employer Regulations

Titled, “The State of Change: Amid Federal Regulatory Uncertainty, State and Local Employer Regulations Are on the Rise,” the infographic looks at:

The Washington Post has reported the Trump administration plans on pulling or suspending 860 pending regulations. And many businesses are happy he is keeping this campaign promise as they fight mandatory minimum wage and other regulations.

Paychex president and CEO, Martin Mucci, points out the argument both sides are making. For the deregulation point of view, he explains:

“The Trump administration is actively moving forward with its plans to create a more business-friendly environment. Part of that agenda is the reduction of current regulations impacting employers.”

As for why the states are creating more regulations, Mucci adds, “With the intent of advancing worker protections, state and local governments are responding, ushering in a new wave of employer-facing regulations.”

No matter which side of the political spectrum you stand on, there is no disputing the number of federal regulations on the books. And while local, state and federal governments have different perspectives, it’s important to  remember small businesses employ around 60 million people or 47.8 percent of US employees (SBA 2016), so regulating them out of business will not help anyone.

Check out the Paychex infographic below.