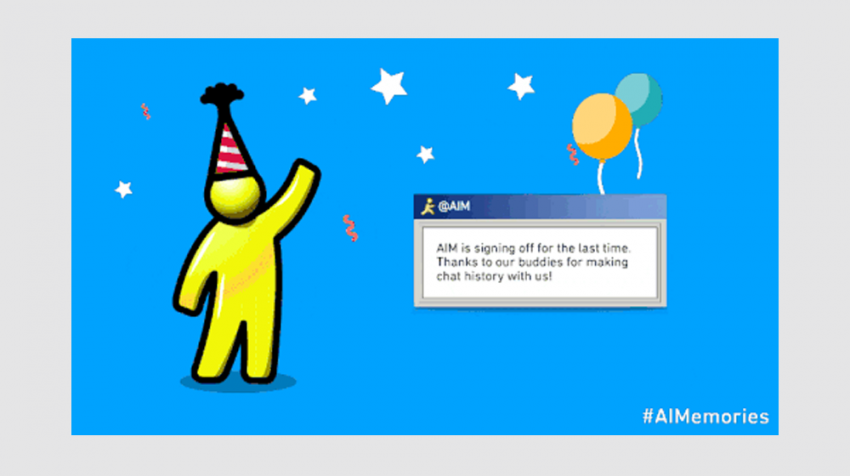 Get ready for one final good-bye from a familiar voice.

After 20 years, when people needed to get off the phone to go online, AOL Instant Messenger was there. Now it’s leaving for good before the end of the year.

Oath (NYSE:VZ), the Verizon-owned company that controls AOL, announced last week that AIM will shut down on December 15.

It’s OK to shed a tear for the tool that really never kept up with the instant messenger tools we rely upon today in small business. But take stock in its imminent demise. You’ve got to constantly adapt to the fickle needs of today’s consumers if you hold out any hope of survival for your own business.

“If you were a 90’s kid, chances are there was a point in time when AOL Instant Messenger (AIM) was a huge part of your life. You likely remember the CD, your first screenname, your carefully curated away messages, and how you organized your buddy lists,” writes Michael Albers, VP of Communications Product at Oath, on the company’s official Tumblr blog.

When AOL Instant Messenger first came onto the scene in 1997, it was something many had never seen before. Sure, there were other instant messenger apps before it but none with such widespread appeal and availability.

But it all became a forgotten memory when new, more powerful IM tools  came along. Today, a lot of small businesses and freelancers can’t get through a day without at least one instant messenger app like Skype, Google Hangouts, Facebook Messenger, Slack, WhatsApp, and so many more.

But in this crowded marketplace, there doesn’t seem to be much room for the original.

So, if everyone’s using IM so much, what happened to AIM? AIM remained basically the same as it ever was. It was just a place to connect with friends for a chat. There was never any concerted effort to tinker with the original and pitch this as a business tool.

“AIM tapped into new digital technologies and ignited a cultural shift, but the way in which we communicate with each other has profoundly changed,” Albers writes.