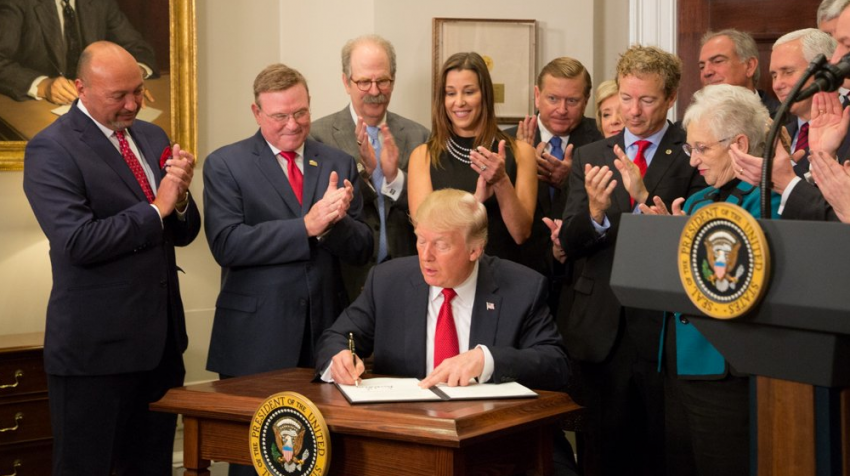 Obamacare still hasn’t been repealed. And the chances it happens before the end of the year seem unlikely.

However, last week President Donald Trump performed a bit of an end-around on the stifling healthcare bill by signing an executive order aimed specifically at providing small businesses some relief — and more affordable health insurance options.

In a ceremony at the Oval Office, Trump signed an executive order that does a few things to directly impact small businesses.

The order directs the secretaries of the departments of Health and Human Services, Labor, and the Treasury to re-establish health care associations, or association health plans (AHPs).

The groups that typically would buy an AHP are trade organizations or other business groups, though Trump’s executive order does allow for the creation of new groups to purchase insurance.

“We aim to allow more small businesses to form associations to buy affordable and competitive health insurance,” Trump said. “This would open additional options for employers to purchase the health plans their workers want.”

Trump also specifically directed Labor Secretary Alexander Acosta to work toward making these associations available to small businesses and their employees across state lines. This falls back on a campaign promise Trump repeatedly made to “erase the lines” that prevented health insurance companies from operating much the same way auto insurers do.

“The competition will be staggering,” Trump added. “This will allow thousands of small business employers to have the same purchasing power as large employers to get more affordable and generous insurance options for their workers.”

Conceivably, this would allow small businesses across the country in the same line of work to band together to purchase health insurance with the same leverage as a larger company would.

A written statement from The White House states: “By potentially making it easier for employers to band together, workers could have access to a broader range of insurance options at lower rates in the large group market. Employers participating in an AHP cannot exclude any employee from joining the plan and cannot develop premiums based on health conditions.”

The President says these healthcare associations were in place for small businesses prior to Obamacare being signed into law. They quickly became unaffordable to many who were enrolled, specifically the small businesses that benefited from them.

“People had plans that worked and they were suddenly cut off,” Trump said.

IFA President and CEO Robert Cresanti said, “President Trump’s move to improve association health plans is a step toward ensuring a competitive market that would demand flexibility and affordability for small business owners. We look forward to working with the Administration to implement this important policy.

Karen Kerrigan, the president and CEO of the Small Business and Entrepreneurship Council, says she hopes to work with Trump administration officials to finally make HRAs purchasable by small business owners, too.

The executive order signed on Oct. 12 also calls for the creation of Health Reimbursement Arrangements. These would allow small business owners to reimburse their employees for their healthcare expenses.

Specifically, these expenses include the co-payments and deductibles that an employee would have to pay out-of-pocket for their healthcare.

In a written statement, Kerrigan said, “The various measures in the executive order address the different needs of entrepreneurs and small business owners, and we especially applaud efforts to expand health reimbursement accounts (HRAs) and allow for short-term insurance. These measures can provide more flexibility, and directly empower entrepreneurs and individuals in their health care decision-making based on their financial resources and health coverage needs.”

These plans are suited for people between jobs, who have limited options available through the ongoing Obamacare exchanges or who missed enrollment periods and need a short-term health insurance plan.

Kerrigan added that STLDI plans address the changing look of the American workforce and the needs of entrepreneurs. She said, “Our regulatory systems need to allow for how people currently work, and how they will work. As they cycle between full-time jobs and gig work, more affordable and flexible health coverage is desirable. This is a vital option for startups and the newly self-employed.”