Small Business Optimism Drops, But Not For Long, Says NFIB 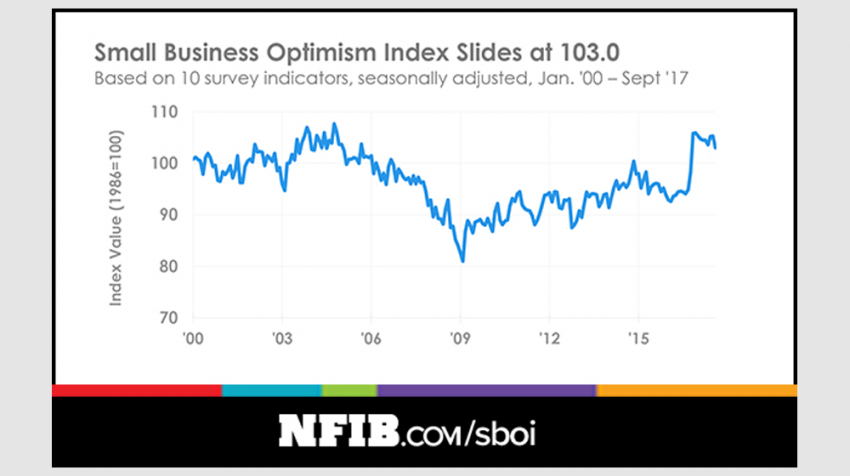 The optimism coursing through many small businesses earlier this year is not as easy to detect right now.

According to the September NFIB Index of Small Business Optimism report, the dip in sentiment is fueled by a large drop in expected sales.

The results, according to NFIB, have nothing to do with the bad luck many small businesses experienced in the wake of a series of recent hurricanes.

Still, the report isn’t predicting the downward numbers to trend for too long. Experts says it’s more of a momentary realignment of expectations.

NFIB Chief Economist Bill Dunkelberg says small businesses lost some of their optimism for proposed policy changes in Washington.  While they are still up beat overall, the September slip in numbers echoed this.

But the report found on the NFIB website still reflects an overall positive mood.

“The Index remains very high by historical standards,” Dunkelberg says.  “Small business owners still expect policy changes from Washington on health care and taxes, and while they don’t know what those changes will look like, they expect them to be an improvement.”

The report also says hurricane relief spending will provide a significant boost next year and reduce the chances for recession.

Still six of 10 NFIB indexes fell in September. Inventory plans was one of the bright spots rising five points since business owners are looking for a stronger fourth quarter.

The NFIB Research Center has been collecting Small Business Economic Trends data from National Federation of Independent Business members since 1973.