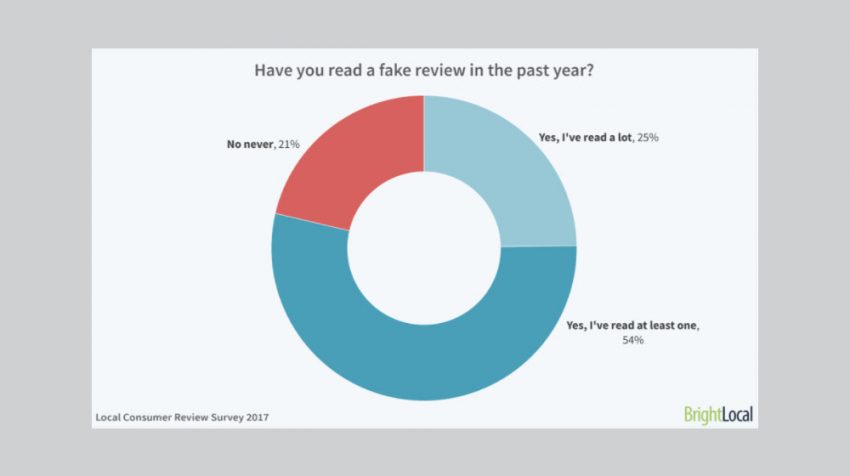 Would you reconsider your attitude on consumer reviews if 97 percent of customers said they had read reviews for local businesses in 2017? Well, that is one of the findings of BrightLocal’s 2017 Local Consumer Review Survey.

For small businesses, the gain or loss of customers has a bigger impact than for a large company. Being able to gain an insight into what your customers think about your business can go a long way toward retaining them for the long run. And online reviews are one of the best ways of gauging how you are doing.

BrightLocal’s Local Consumer Review Survey was conducted in the US in October 2017 among 1,031 consumers. The survey, which is carried out annually, is designed to capture the attitude and behaviors of consumers when they are looking at an online review for local businesses.

So, how important are online reviews?

Myles Anderson, founder and CEO at BrightLocal, said in a press release, “Every year we see even more consumers looking at online reviews when choosing a local business. And the bar is rising with half of consumers only considering businesses that have a rating of 4 or 5 stars.”

Of the 97 percent of consumers that read reviews for local businesses, 12 percent said they were looking daily. But the survey also revealed another important stat. It takes a customer an average of seven reviews before trusting a local business. And when it comes to trust, 85 percent indicated they trusted reviews as much as personal recommendations.

With reviews playing such an important role, the dangers of fake reviews become even more relevant.

Takeaway from the Survey

As small businesses compete for customers online and in the physical world, they must have a strategy in place to handle reviews.

As Anderson explains, “It’s no longer enough to expect reviews to come to you. Every business needs a strategy in place to encourage happy customers to feedback, monitor across the different review sites, and respond to both positive and negative reviews quickly and professionally. And remember — if you don’t ask, you won’t get.”

You can go through all of the valuable data in the survey here.