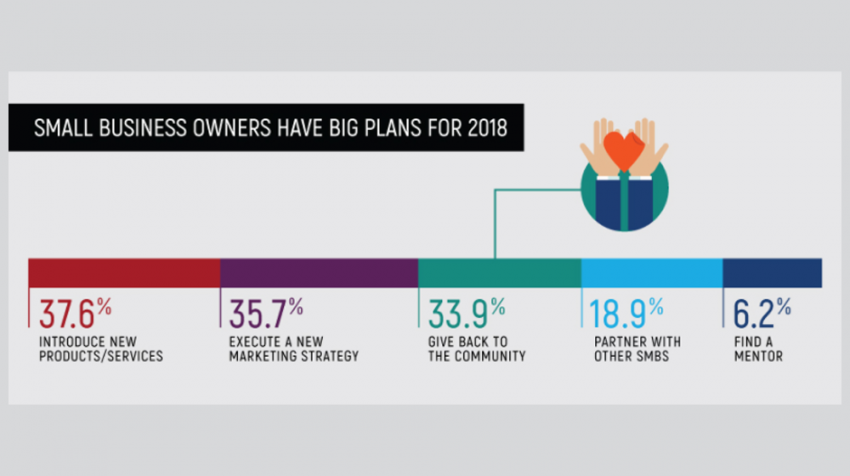 Small business optimism remains high and with this optimism comes thoughts of growth.

According to a Microsoft Store and SurveyMonkey survey to determine trends for the upcoming year, the company found that 90 percent of small business plan to hire one or two employees next year. At the same time, counter to this optimism, is the reality of running a small business.

Of those responding, 23 percent said budget constraints were their most important worry for 2018. This worry could be a damper on plans to grow by hiring.

For the survey, Microsoft Store polled 1,300 small businesses in the U.S. Companies surveyed had between 1 and 200 employees. Microsoft Store shared the information with Small Business Trends ahead of releasing the data.

Here are some other key takeaways from the results, highlighting where small business owners will be focused in 2018:

A number of small businesses (37.6 percent) planned on launching new services and or products despite these ongoing concerns about their budgets. Still, these potential  cash issues  topped the list of worries for 23 percent of respondents and small companies that had been in business for less than a year were the most concerned.

There were other optimistic numbers. Just over 35 percent of the respondents said they were going to put together a new marketing strategy. Just under 40 percent said they have plans to give back to the community where they run their business.

However, many small business were lacking when it came to one of the most important issues for modern enterprises.

Many reported they felt unprepared for cybersecurity threats. What’s worse, a number were either not concerned about a serious data breach (50 percent) or are not planning to protect themselves (25 percent).

There were also a number of respondents that took cyber security seriously. Of those, many said they would rather pay for a service than do it themselves. Thirty percent of this group reported using encryption software and 40 percent said they made sure their employees were using antivirus software.

Less that one quarter of small businesses said they were looking to partner with another small business. Only a small number of respondents (6.2 percent) were trying to find a mentor.

For more information about the Microsoft Store survey, please see the infographic.

Rob Starr is a staff writer for Small Business Trends. Rob is a freelance journalist and content strategist/manager with three decades of experience in both print and online writing. He currently works in New York City as a copywriter and all across North America for a variety of editing and writing enterprises.
5 Reactions
Subscribe
Follow @smallbiztrends
RSS LinkedIn Pinterest iTunes