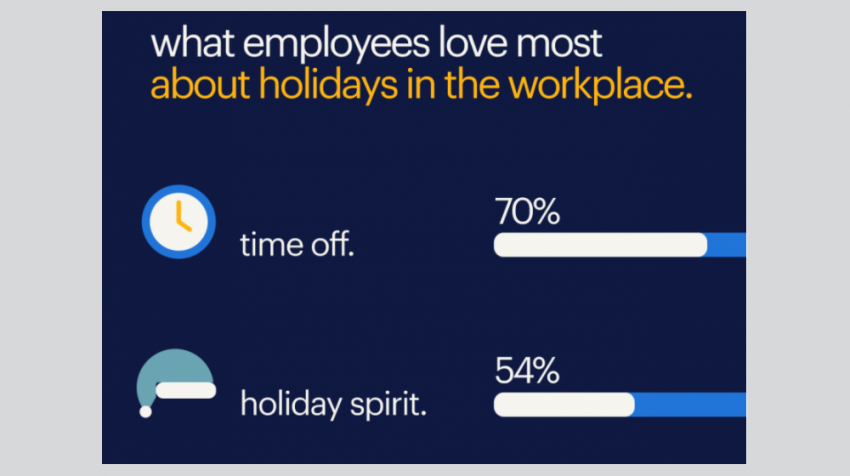 You may be starting to think about what to get your employees as a nice holiday gift.

What Your Employees Want for the Holidays

According to a just released survey from Randstad US, the one thing employees loved most about the holidays was having some time off from work. In the survey, 70 percent said they love the time off they get at the holidays.

So, if you’re already wringing your hands wondering what to get your employees for a gift, consider letting them stay home a couple extra days. Though it might be a challenge with the busy season, try to offer time off as near the holidays as possible

Yes, you may be busy but consider how busy their lives are at home, too.

More results from the Randstad US survey also emphasize the importance of finding some way to give employees that time off at the end of the year.

According to the data out today, 62 percent of employees already plan vacations during the holiday season. And half of those surveyed say their company gives them no extra time off during that time.

Want to wow those who celebrate Christmas? The holiday falls on a Monday in 2017. That’s a baked-in 3-day weekend but how would your employees react to having off the Friday before or the Tuesday after Christmas — or both?

Otherwise you’re likely going to field a call for at least one “sick” day. Twenty-eight percent of those surveyed say they use paid sick time and not vacation time at the end of the year.

Of course, this doesn’t mean employees don’t love an old-fashioned cash bonus. They’d much prefer that over an old-fashioned office party. Of the 1,232 employees over the age of 18 surveyed, 34 percent look forward to getting a bonus at the end of the year.

And overall, 90 percent say they’d prefer to get some extra time off or extra vacation days or a bonus than have an office holiday party. Older employees feel obligated to go to such a party and younger employees feel pressure to go. That’s a lot of uncomfortable people who’d rather be somewhere else.

Only 33 percent told Randstad US that they look forward to a holiday party the most. Just 22 percent said potlucks are the best. A lowly 11 percent really want to participate in a cookie exchanges and 9 percent get excited about gift exchanges more than anything else. So these holiday traditions should probably be low on your list of priorities.