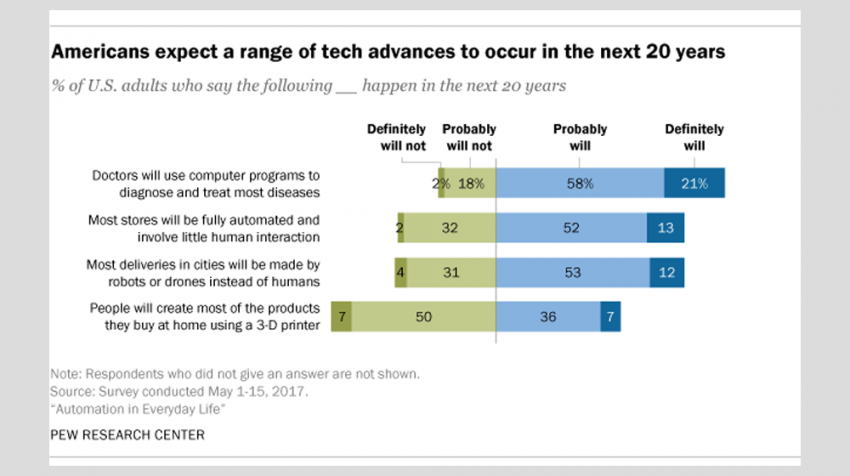 The latest Pew Research Center survey revealed 52 percent of Americans believe stores will probably be fully automated in the next 20 years. But 13 percent said it will definitely happen, bringing the total number who see automation having an impact in the segment to almost two-thirds or 65 percent.

The Pew survey looked at how Americans view automation and the spread of the technology over the next two decades across several industries. Small businesses in the retail sector, including those that rely on deliveries, will be affected, according to the survey.

The Pew Research Center survey was carried out from May 1 to May 15, 2017 with 4,135 US adults participating. Participants are part of the American Trends Panel, which was created by Pew Research Center. It includes a nationally representative panel of randomly selected U.S. adults who participate in self-administered web surveys every month.

Small businesses can now access a range of automation solutions for their physical and digital stores to improve their operations. Everything from monthly deliveries to POS software, marketing, customer engagement and accounting can now be automated.

If you choose the right technology for your particular industry, you can introduce new levels of efficiency to your business. This will leave your human employees to deliver the best-personalized customer service possible.

Amazon has already announced intention to use drones for deliveries, and there may now be additional types of robots in the market able to accomplish something similar. Earlier this year, Virginia became the first state to legalize delivery robots.

Restaurants and other businesses relying on making deliveries may soon use drones, robots or other automated technologies as part of their operations. As the price point comes down and the technology becomes more reliable, use of such delivery tools will likely become more common.

Will Automation Impact Your Small Business?

According to a McKinsey Global Report, physical activities in highly structured and predictable environments, and data collection and processing will be the most susceptible jobs to automation. In the US, the activities the report mentions account for 51 percent of the economy, which is responsible for close to $2.7 trillion in wages.

The McKinsey report explains this will not happen overnight. But early implementation of automation, robotics, drones, 3D printing and other technologies allows your small business to compete and stay relevant.

If you are worried machines will have all the jobs, the McKinsey report says, “Our analysis shows that humans will still be needed in the workforce: the total productivity gains we estimate will only come about if people work alongside machines. That, in turn, will fundamentally alter the workplace, requiring a new degree of cooperation between workers and technology.”

The Pew Research Center survey is a must read if you want to know how Americans feel about these technologies. You can take a look at it here.