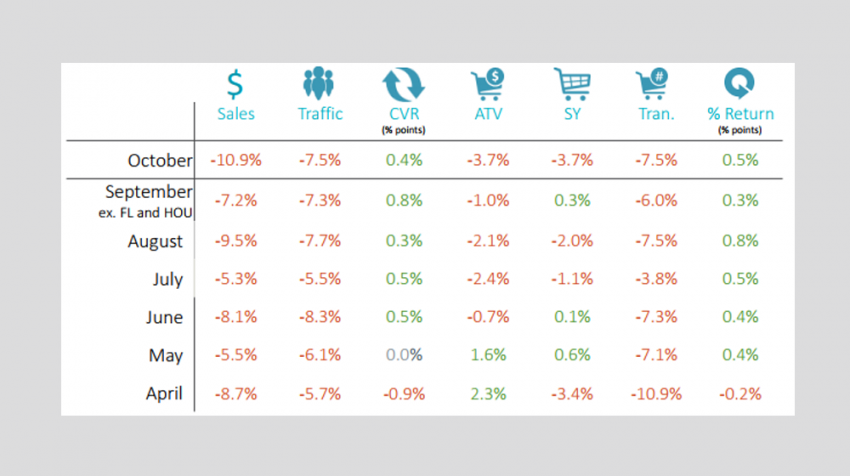 The holiday shopping season couldn’t come soon enough for brick-and-mortar retailers in the US. There may be an economic upturn coming, but small retail businesses in the U.S . have yet to sit

According to the October RetailNext Retail Performance Pulse, sales at these retailers were down once again by 10.9 percent. The slowdown was the largest in the last six months for retailers. The drop in sales even outmatched poor numbers in August for brick-and-mortars, when they saw a 9.5 percent drop in sales.

And compared to the same month in 2016, October sales were down 7.5 percent.

It’s not just sales that are tumbling for retailers. Foot traffic continues to decline too. According to the Pulse, foot traffic at retail stores dropped 7.5 percent in October too. Both declines  may suggest ecommerce is beginning to eat away at brick-and-mortar sales more consistently.

Looking for a bright spot or silver lining from this report? The people who do go to retail shops are more likely to purchase something.

Conversion has risen for the fourth month in a row and Shopper Yield spiked with it. Still these numbers weren’t enough to offset the drops in average transaction value. The number of overall transactions dropped from -6.0 percent in September to -7.5 percent in August.

October had it’s best numbers early in the month. Both Shopper Yield and Conversion peaked on October 5. Sales and traffic peaked on the following Saturday, October 7. The average transaction value (ATV) had it’s best day right at the beginning of the month and the numbers dropped after that.

The regional data highlighted some disparities. The Midwest led the entire country in sales with the South coming in a close second. Bad numbers in the East and the West skewed the numbers downward and were responsible for the dismal overall showing. 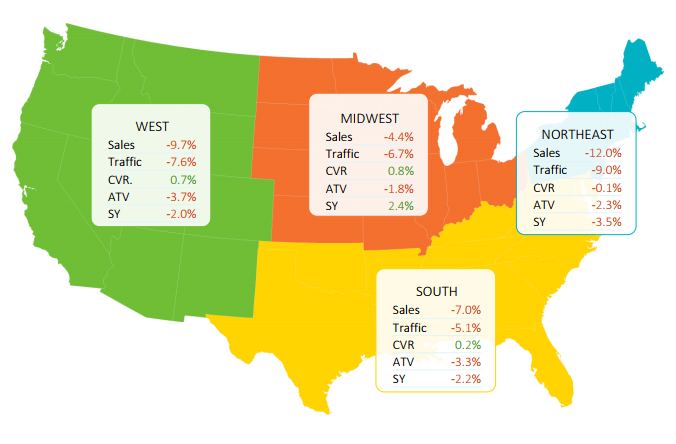