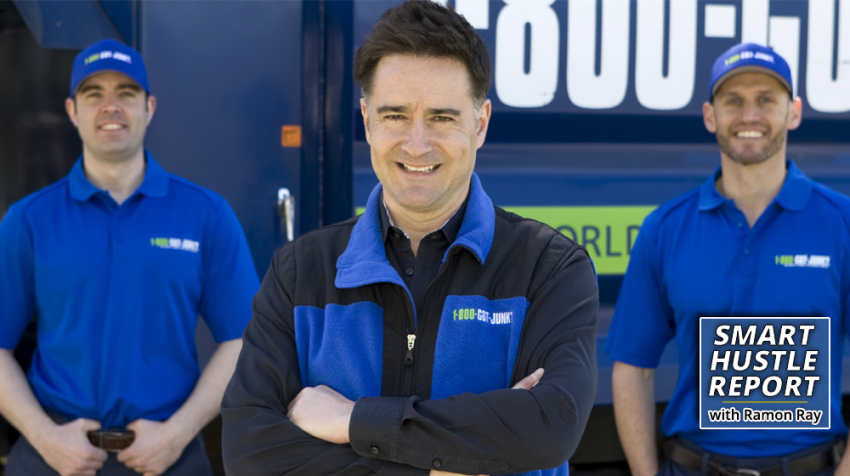 It’s the ambition of many entrepreneurs to grow a small startup into a big, international brand. Brian Scudamore, founder and CEO of O2E Brands, the company behind 1-800-GOT-JUNK and other home service brands, has achieved just that.

Scudamore, who recently spoke with Small Business Trends as part of our exclusive Smart Hustle Report, started his company with just a single truck. And he eventually grew it into a $400 million company with more than 2,000 trucks across Canada, the U.S. and Australia. But he didn’t do it by thinking big right from the start. Instead, he focused on building a strong foundation and adapting to new challenges as they came.

In fact, that adaptability extends even to the situation that led him to entrepreneurship in the first place.

Scudamore explains, “When I started my business 28 years ago, I started really with the goal of paying for college. I was in a McDonald’s drive thru, saw a beat-up old pickup truck, boom. It’s filled with junk. There was my ticket.”

But because of the company’s growth and the opportunities he saw, Scudamore eventually dropped out of college to focus on 1-800-GOT-JUNK.

The business has grown exponentially since then. And Scudamore credits a lot of that success to work he did early on, as well as scaling one step at a time.

You can listen to the full discussion right here.

Here are some small business growth tips for other business owners from Scudamore’s experience.

If you want to build a business that you can scale, you need to start strong. Scudamore says that everything you do building up to your first million dollars in revenue is more important than what you might do after that.

He explains, “So if you get everything right at a million, then they’re building blocks for the future. So think of the first plateau or platform of the foundation being a million in revenue. You get that right, you build a strong foundation for the skyscraper you’re going to build.”

Part of that strong early start has to revolve around your team. If you hire great employees who can help you achieve your mission, those are the people you want surrounding your business as it grows.

Scudamore says, “The people, you have to hire the right people and treat them right. If you got the wrong people, you’ll do what I ended up doing in 1994, five years into my business. I fired all 11 people because I realized I compromised on the quality. And I didn’t have the right people in the right seats. So I had to start again with me as a leader that let everybody down. But I had to make a pivot and start again.”

Keep That Foundation in Mind as You Scale

Then, of course, you’ll want to take all of those lessons and qualities that helped you early on and use those as your business grows. Luckily, Scudamore believes that small businesses with a strong foundation have the ability to grow fairly seamlessly.

Ramon is an entrepreneur, best selling author and global speaker. He is the founder of Smart Hustle Magazine. You can read more about Ramon.