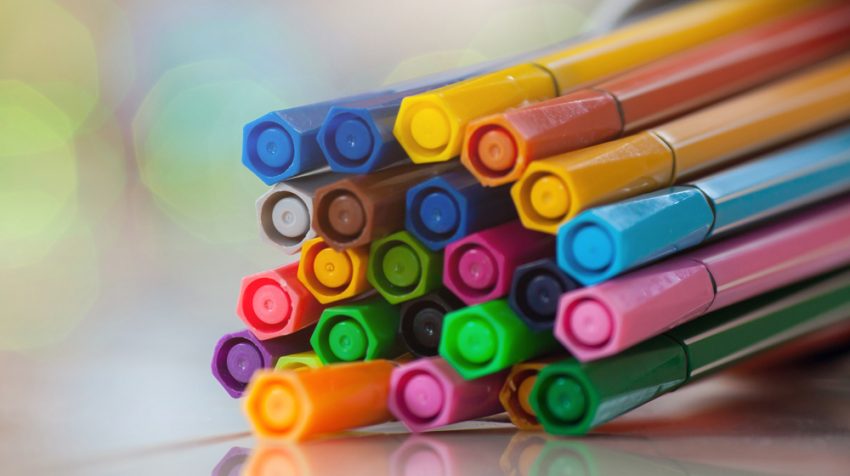 When starting your small business, you hoped you’d be able to create a new culture leaving behind some of the problems of the big corporate world.

Well, the results (PDF) of the 2017 Brother (TYO:6448) Business Survey show that small business and big business alike share some of the same problems just on a different scale.

Take, for instance, this one highly relatable stat: 90 percent of small business owners believe their employees are lifting office supplies and taking them home.

The most commonly stolen item? A pen (or pencil). According to the 500 small business owners and decision makers surveyed by Brother, 62 percent say they believe employees are taking pens and other writing implements home with them. Other commonly stolen office supplies include sticky notes (according to 46 percent of respondents), printer paper (according  to 42 percent), and paper clips (according to 41 percent).

It makes you wonder … what are they doing with these things at home? 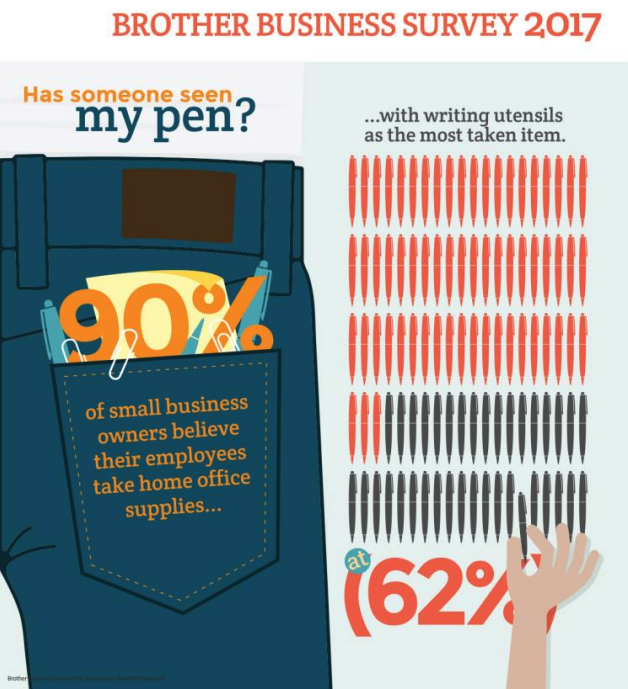 Outside of office supplies, probably the most valuable thing to your small business that’s being taken by employees is your time. And that’s a hard thing to replace.

Whether it’s showing up late or leaving early (or both), 69 percent of those surveyed by Brother believe this is the top office crime. Tied for second place in the Brother survey were two other “crimes”: talking loudly on the phone and not refilling the paper in the printer when it’s empty.  Fifty-seven percent of small business owners surveyed indicated one or of these were a problem. 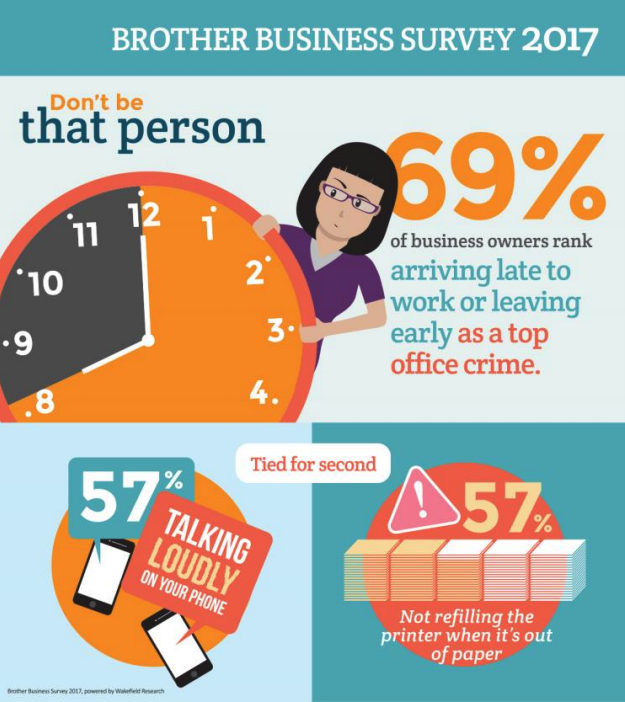 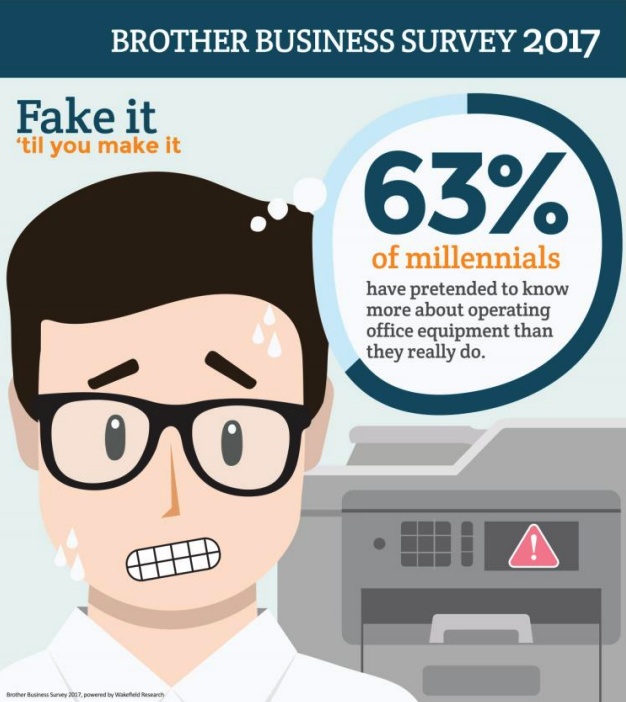 Paying the Cost to be the Boss

Being the boss of the company is probably one of the driving factors that led you to start your own business. Well, heavy is the head that wears the crown. You’d better start exercising that neck to make sure it can sustain the pressure.

In a small business office, 85 percent of owners believe they’re the most productive of all the workers. 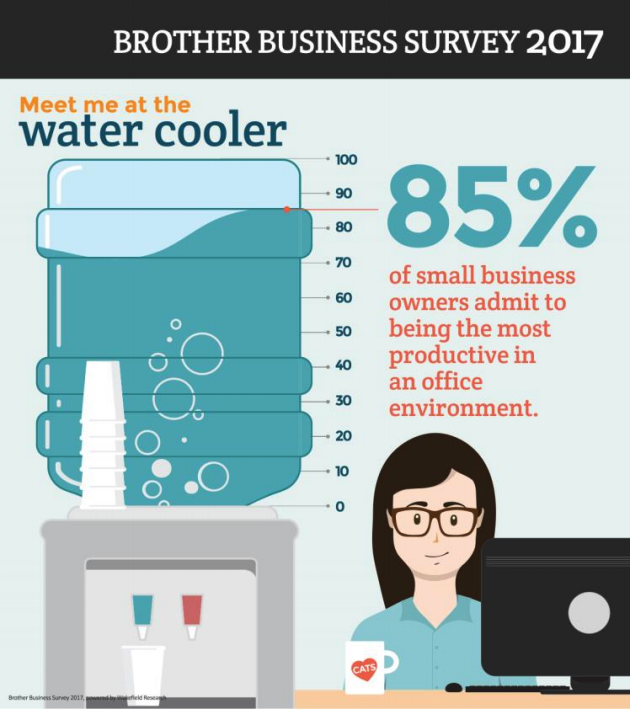 So what can small business owners do to alleviate some if these problems?

According to the survey, 97 percent of small business owners believe better management is the answer. Improving process remains one of the top ways to improve management, the survey suggests. The survey identifies staying organized and creating better budgets as two other ways management can be improved.

But probably the biggest problem faced by small business owners, the survey suggests, is not being able to step out of the day to day. In fact, 58 percent of those surveyed say they can’t be away from their business for more than two days before they need to be called to solve a problem. 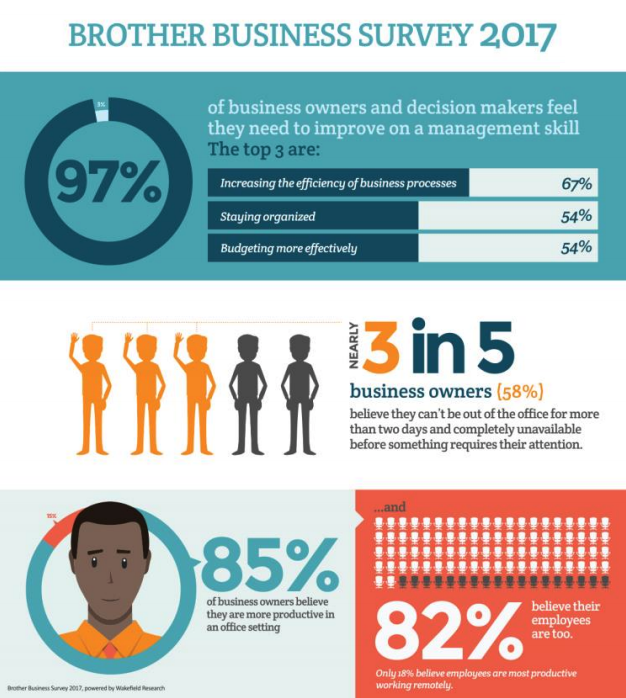