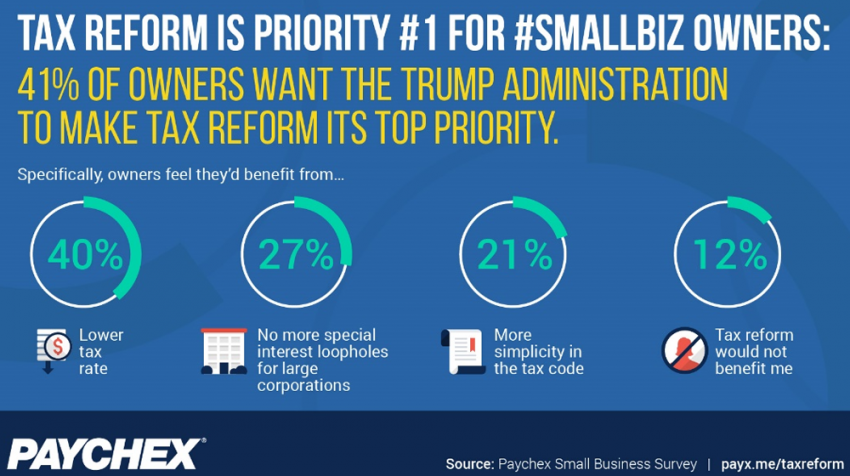 When Republicans in the House of Representatives release their version of a tax cut or tax reform bill today, small business owners across the country will be watching closely.

Almost Half of Small Business Owners Want Tax Reform First, Before Anything Else

“President Trump ran on the promise of creating a more business-friendly environment. Our data indicates businesses see changes to the tax code as a top priority, and they’re anxiously awaiting what reform may come over the next several months,” says Martin Mucci, Paychex president and CEO, in a company statement released with the data.

So small business owners would seem to believe tax reform should be more of a priority than any of the other issues asked about in the Paychex Small Business Survey conducted in late-August. Those other issues small business owners believe Trump and Congress should also focus on include the Affordable Care Act/Obamacare (15 percent), infrastructure projects (15 percent), and reducing regulations (9 percent).

A Tax Bill for Christmas?

President Trump has stated he wants to sign a new tax reform bill into law by Christmas this year. He’s made arbitrary deadlines in the past that Congress has failed to meet. Most notable among them has been the inability to pass a repeal of the Obamacare legislation.

Trump tweeted this message on Tuesday, ahead of the Republican legislation being introduced: “The Republican House members are working hard (and late) toward the Massive Tax Cuts that they know you deserve. These will be biggest ever!”

The Republican House members are working hard (and late) toward the Massive Tax Cuts that they know you deserve. These will be biggest ever!

According to the Paychex survey, it appears Trump is right to suggest that tax cuts (or a lower tax rate) should be the first priority in any tax reform package from small business owners’ perspective.

Among those who say tax reform is the top priority, 40 percent say the reform bill should feature a lower tax rate above all else. The next most important priority of the tax bill should be to eliminate the “loopholes” that favor larger corporations over small business.

Twenty-one percent say the tax bill should make the tax code simpler more than anything else. And 12 percent of all responding say that a tax reform bill wouldn’t impact them at all.

To get this data, Paychex surveyed 341 “principals” at small businesses across the country. Not all those responding were Paychex clients, the company says.