These States Require the Most Licensing – Hurting Small Businesses in the Process, Study Says 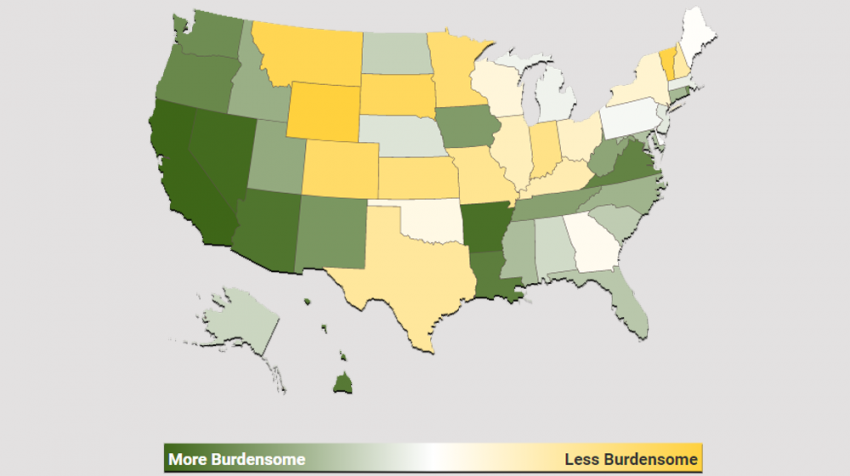 Arbitrary — and sometimes irrational — state licensing requirements imposed on certain businesses is killing an entrepreneurial spirit and new jobs at the same time.

These licenses for occupations like barber or bartender require, on average, one exam, almost a year of education, experience and $267 dollars in fees. On average, states license 54 different professions. But which professions require licenses varies from state to state.

License to Work: A National Study of Burdens from Occupational Licensing (2nd ed.) from the Institute for Justice, describing itself as the only libertarian, civil liberties, public interest law firm in the U.S., reports most states impose these burdens. The number of American workers who need a license has gone from from 1 in 20 in the 1950s to roughly 1 in 4 today.

In most states, it takes more than 10 times longer to get a cosmetology license than it does to become an emergency medical technician, the report finds as one example of perhaps too many burdensome requirements to enter some professions.

Lisa Knepper, director of strategic research for the Institute of Justice and co-author of the report, explains how these licensing burdens are bad for the economy and the people trying to better their lot.

“Research provides scant evidence that licensing does what it is supposed to do — raise the quality of services and protect consumers,” Knepper says in the official announcement of the study. “Instead, licensing limits competition, leading to higher prices and reduced access to jobs.”

Some jobs have much steeper requirements than others but may only be require licenses in a handful of states. Interior designers, for example, require about 2,200 days of education and pay an average of $1,265 dollars in fees for a license. However, licensing is only required in three states and the District of Columbia.

In another scenario, an athletic trainer needs to be licensed in 49 states and pay an average fee of $472 dollars.

At the other end of the scale, a nursery worker only needs a license in two states with an average fee of $55 dollars.

The report ranks the states based on whether a license is needed and also on the requirements for those licenses. Louisiana and Washington take top spots for most regulations. They license 77 occupations each. California licenses 76 and comes in second. Nevada comes in third at 75 licenses. Wyoming has the fewest licenses required. The state only licenses 26 occupations.