Small Business Loan Application Approvals Up Across the Board 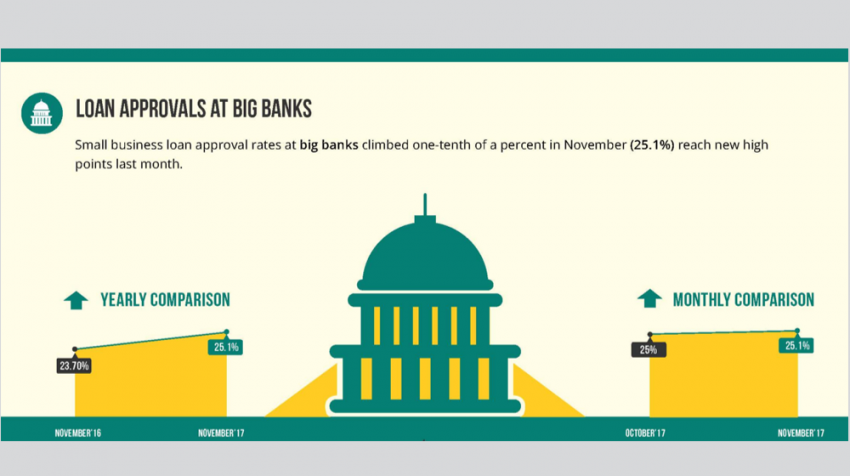 The Biz2Credit Small Business Index for November 2017 revealed an across-the-board increase in the business loan approval rates for bank and non-bank lenders. According to the study, there were record highs with every category of lenders, showing improvements for the month.

The approval rates for small businesses was at 25.1 percent at big banks, while institutional lenders reported 64.1 percent, both new highs for November. As for small banks, there was also a rise of one-tenth of one percent to 49 percent from the 48.9 percent of October.

Key economic indicators, as well as optimism with President Trump’s tax reform plan, deregulation in the banking industry, and higher interest rates, are in part responsible for the uptick in small business lending.

In addressing some of the reasoning behind the higher numbers, Biz2Credit CEO Rohit Arora, said in a press release, “The Federal Reserve has increased interest rates from their historic lows, and regulation of the banking industry is subsiding under Trump. Banks both large and small are more likely to lend under the current atmosphere.”

The Biz2Credit Small Business Index is based on primary data which is submitted by more than 1,000 small business owners who have applied for loans on Biz2Credit’s online lending platform. This platform connects business borrowers and lenders, which gives the data that comes from the index an added level of reliability and immediacy for its monthly reports. The company analyzes loan requests ranging from $25,000 to $3 million.

The November index also reported alternative lenders saw an increase of one-tenth of one percent. For this particular segment, it was a great improvement because alternative lenders have experienced consecutive declines lasting more than one year. November’s number was 56.9 percent compared to October’s 56.8 percent.

For credit unions, also going through record lows in October, the approval rate was 40.3 percent for November — also an increase.

Take Away for Small Businesses

Whether you are just starting out or an established small business owner, this is a good time to start thinking about getting a loan. According to Arora, there is pent-up demand for small business credit in the marketplace. He goes on to say, businesses can take advantage of the current environment because it is less challenging to secure funding.