This Company Went Low-Tech to Fill a Hi-Tech Job 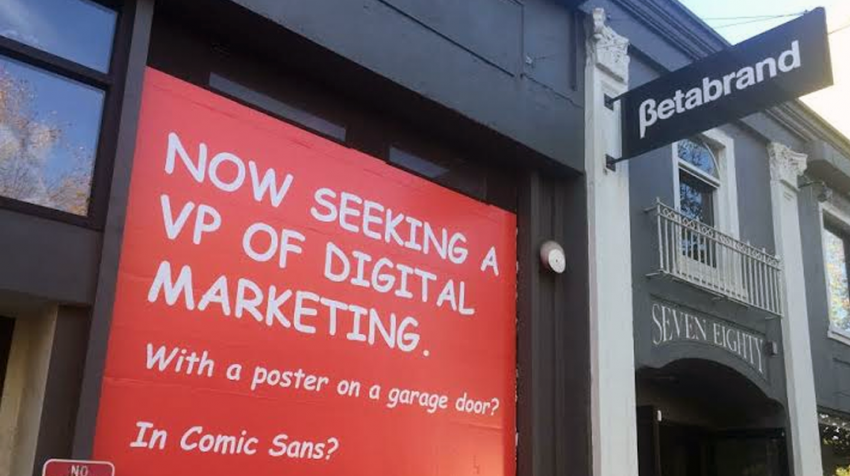 Technology has had a major impact on the recruiting and hiring process. But one tech company is bucking the trend and going low-tech with its hiring efforts — by using a simple sandwich board.

Betabrand is an online crowdfunding platform that focuses on clothing designs. Clearly, it has the resources and tech knowledge to create a job posting. So what made the company decide against simply posting jobs online or combing LinkedIn for great potential candidates?

The team at Betabrand already had a history of trying out unconventional marketing stunts. So when the company’s CTO became frustrated with the candidates it found through those online methods, Betabrand opted to try something similar with recruiting. That realization, along with the company’s location in an area that’s popular with their potential candidates, made the sandwich board idea seem like a perfect fit.

Chris Lindland, Betabrand’s founder and CEO said in an email interview with Small Business Trends, “It’s hard to show much personality in job posts. And Valencia Street in San Francisco probably gets more engineering traffic than LinkedIn or Angelist.” 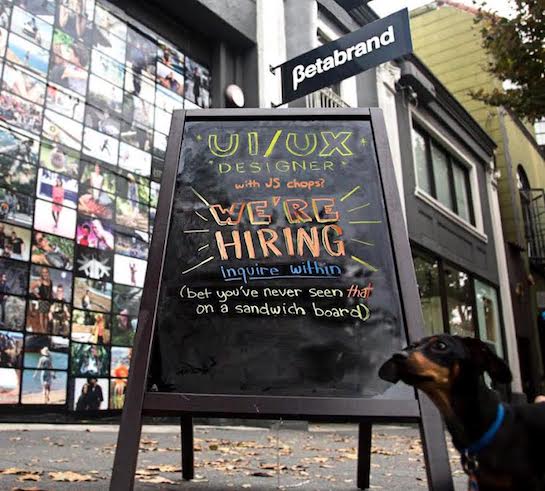 The original sandwich board advertised a job for a UI/UX designer, a position that the company was able to fill within a week. So then they decided to double down and use the board again to hire a front end developer. They filled that position in just three days.

This is just one of the unique creative recruiting stunts Betabrand has pulled in its efforts to pull in the perfect candidates. The company also wrecked its homepage to demonstrate its need for a new developer and recently put up a huge garage door sign using the dreaded Comic Sans font to attract a new VP of digital marketing.

Weird? Sure. But for a company that’s looking for candidates to fit into a specific type of culture, especially a highly creative one, these creative recruiting strategies allow Betabrand to show some personality. And that’s something that’s pretty difficult to do when you’re using the same hiring strategies as every other company out there.

That doesn’t mean that you have to delete all of your online accounts and do all your recruiting offline from now on. But it does offer some inspiration for businesses looking to stand out, either when it comes to hiring new candidates or attracting new customers with guerilla marketing tactics.

The key is simply to think about your target audience and come up with unique ways to communicate with them. Don’t just stick with the status quo because it’s what your competitors are doing or what the so-called experts are telling you to do.

Lindland sums it up, “It helps to go where people are at and to do so in a stand-out manner. People gravitate towards creative things and garage doors, sandwich boards, and horrible homepages have shown folks that Betabrand’s a creative place to work.”