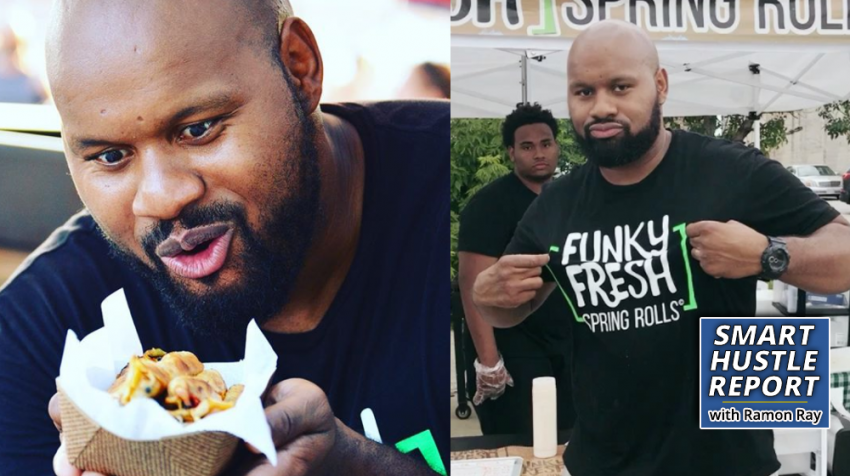 Sometimes you have to get tired before you can get successful — physically tired, mentally tired, emotionally tired — basically, just ready to make a major change. That was the case for TrueMan McGee, founder of Funky Fresh Spring Rolls. In his case, the change initially came in his personal life. But it eventually led to a business as well.

McGee spoke with me for the latest edition of our exclusive Smart Hustle Report. During the discussion, McGee detailed how his business got started and some of the factors that led to its growth. The initial catalyst is what McGee calls his “getting tired” moment, which took place on March 1, 2012. He still remembers the moment vividly.

He said, “I think once you hit bottom, that’s the best time to change.”

At the time, McGee weighed about 300 pounds and was tired of eating unhealthy foods pretty much every day. So he changed his diet and eventually started a personal training business.

But Funky Fresh Spring Rolls, a company that focuses on creating more interesting and healthier versions of spring rolls using fresh and local ingredients, didn’t come about until much later. It actually started because of a burrito. McGee had made it with sweet potatoes and black beans and had some family members try it. When they raved about it, he knew he had uncovered something great. But at the time, he wasn’t even thinking of it as a business opportunity. He just wanted to give people an easier way to eat healthy.

McGee said, “My love of fitness kind of reignited my love for cooking, because I just wanted to get people to eat healthier foods.”

But the more time passed, the more he started to realize the potential behind his idea, which by this point had morphed from general healthy foods to spring rolls made with fresh ingredients.

He said, “I just kind of felt deep down that this could be something huge because I was getting an overwhelming response from my clients and their friends.”

You can listen to the full discussion and then check out some of the top tips and insights below.

Choose a Name That Sets You Apart

Funky Fresh Spring Rolls is obviously a unique and attention grabbing name. When coming up with it, McGee says he was looking for something that really conveyed how different the company’s products were from anything else out there.

McGee said, “You can have a great business product, but if the name sucks then you might not get that same reach.”

Use Events to Spread the Word

Once Funky Fresh Spring Rolls had the product line in place, McGee was tasked with getting the word out. So he made use of farmers markets and festivals to get the products in front of customers directly.

He said, “You’re going to be in front of hundreds or thousands of people at a time and have face-to-face interactions with them. That was one of the first things that we had to do was to get in front of those customers.”

Finally, McGee insists it’s important for business owners not to be too afraid of failure.

He said, “You will fail. There’s no way around it. It’s just about having the ability to bounce back and to readjust and evolve from your mistakes.”

Ramon is an entrepreneur, best selling author and global speaker. He is the founder of Smart Hustle Magazine. You can read more about Ramon.
2 Reactions
Subscribe
Follow @smallbiztrends
RSS LinkedIn Pinterest iTunes