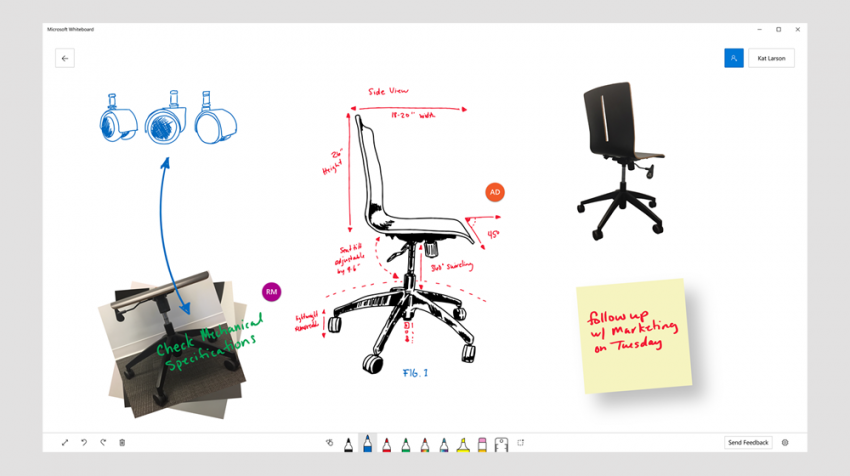 Earlier this week, Microsoft (NASDAQ: MSFT) released a preview of the new Whiteboard app that basically allows you, together with your team, to collaborate on a “digital canvas that displays drawings, images as well as hand-written notes.”

The app has, since early this year, only been available to a small group of beta testers, but Microsoft now says that it is available to all Windows 10 users.

The app comes with ruler tools, pens and sticky notes as well as the ability to drag and drop images on the board. Interestingly, you can even stack images, but even more fascinating is the fact that you don’t have to worry about losing your work since all work is automatically saved.

The app also allows Windows 10 users to create mockup, ink on images or use notes on a virtual whiteboard. In that regard, Microsoft says it uses the app for diagramming its engineering plans.

You can also use the app to collaborate with distant co-workers and yet, you never have to worry about writing over each other as all work is automatically saved, and you can see your peers making their additions and changes. “With real-time collaboration across multiple devices, you can see where everyone is on the board and the updates they’re making — whether they’re adding images, putting up sticky notes or creating diagrams,” said the Microsoft Whiteboard team in the official Whiteboard release post. “Now even remote workers can easily join in and contribute to the discussion.”

The app is currently only available in English, but the tech giant says it will be adding other languages in the coming months.

The app is free for use to anyone with a Windows 10 device, but you will need to have at least one person with an office 365 subscription if you are multiple collaborating users.