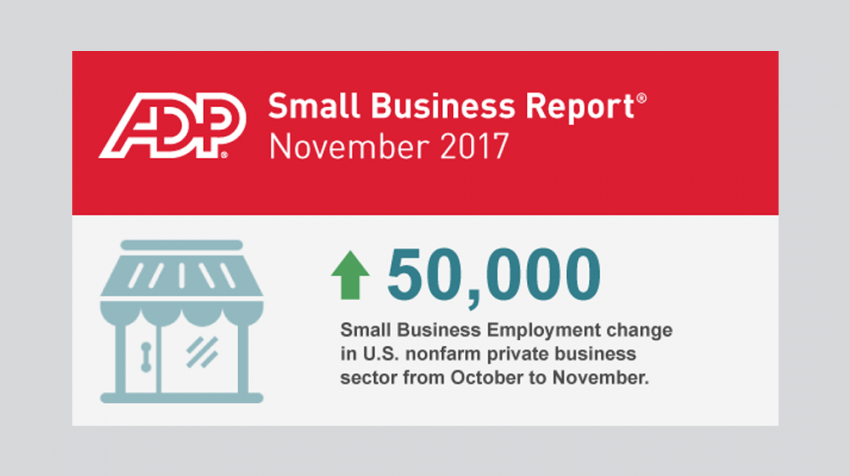 Small businesses are doing their part to contribute to record lows in unemployment and job creation.

According to the latest ADP (NASDAQ:ADP) Employment Report for November, small businesses added 50,000 new jobs to the U.S. economy. That growth is slower than what small businesses contributed in October but is the second month in a row of growth.

In October, small businesses added 79,000 jobs but the month prior, they actually lost 7,000 jobs.

For the overall jobs report from ADP, there were 190,000 jobs added in November among all businesses. In October, that figure also showed faster growth when 235,000 new jobs were created in October.

“The labor market continues to grow at a solid pace,” says Ahu Yildirmaz, vice president and co-head of the ADP Research Institute, in a company statement. “Notably, manufacturing added the most jobs the industry has seen all year. As the labor market continues to tighten and wages increase, it will become increasingly difficult for employers to attract and retain skilled talent.”

Companies with between 20 and 49 employees contributed the most job growth among small businesses in November. During the month, they created 36,000 new jobs, compared to 14,000 among companies with less than 20 employees.

And the 50,000 jobs created were spurred by service businesses. They created 55,000 jobs in November where goods-producing companies actually lost 5,000 jobs. Losses in goods producing small businesses were seen more among the smallest companies. They lost 3,000 jobs compared to the 2,000 lost by companies with more than 20 employees.

Among franchise businesses, restaurants added the most jobs in November, with 19,800 of the new jobs created. Auto parts stores and dealers added another 4,600 jobs in November.

The same trend is seen in the national employment report from ADP. Service businesses added 155,000 jobs in November, compared to 36,000 goods producing jobs. The number of construction jobs actually dropped  during November. There were 4,000 construction job losses nationally during the month.