Small Business Confidence Was Higher Than Ever in 2017 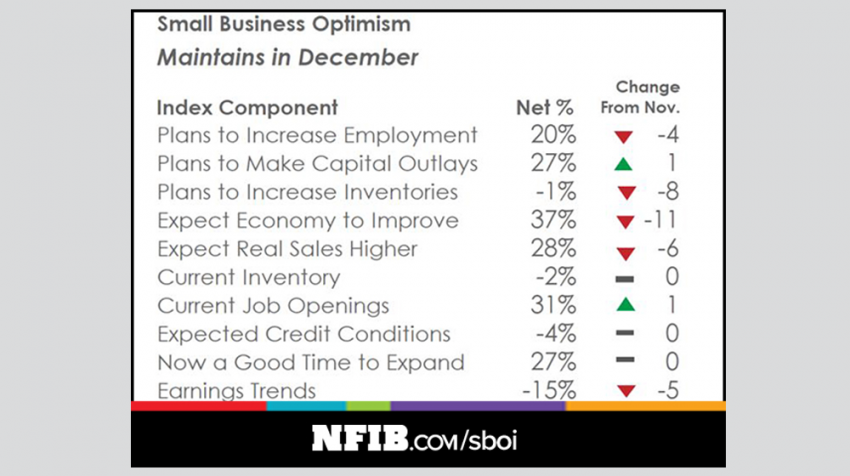 The NFIB recently released its Index of Small Business Optimism indicating how small business confidence blasted off after the 2016 election and remained in the stratosphere for all of 2017 because of “massive tax cuts and significant regulatory relief” as NFIB President and CEO Juanita Duggan puts it.

December’s 2017 optimism index was slightly lower than the near-record November report, coming in at 104.9, yet it was still a historically exceptional performance. According to NFIB, 2017 was a strong year in the history of its survey — one that has been conducted since the fourth quarter of 1973.

“We’ve been doing this research for nearly half a century, longer than anyone else, and I’ve never seen anything like 2017,” said NFIB Chief Economist Bill Dunkelberg. “The 2016 election was like a dam breaking. Small business owners were waiting for better policies from Washington, suddenly they got them, and the engine of the economy roared back to life.”

As a result of the increased confidence, the report states that many small business owners were bedeviled by labor shortage in 2017. According to the report, 31 percent of business owners currently have positions open they are unable to fill — and the problem will become more intense if the optimism continues to grow.

“There’s a critical shortage of qualified workers and it’s becoming a real cost driver for small businesses,” said Dunkelberg. As a counter measure, many small business owners have been raising compensation for workers as means to attract and keep good employees. However this is “a positive indicator for the overall economy, ” Dunkelberg said. And also overall, it is clear that better policies often lead to better economic results.