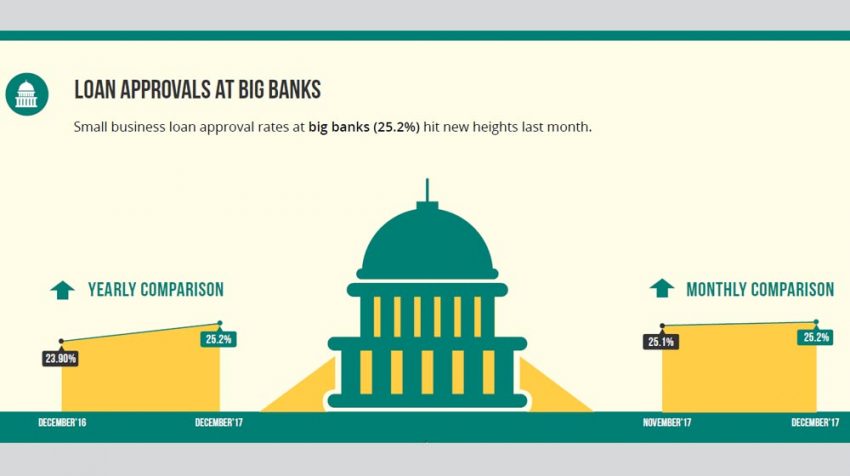 For the month of December, Biz2Credit reported small business loan approval rates for big banks came in at 25.2 percent, a 0.1 percent increase over November. Compared to 2016, the jump for 2017 was 1.3 percent, which is the highest amongst all segments from the Biz2Credit index.

The data for the Biz2Credit index comes from an analysis of 1,000 monthly loan applications on the Biz2Credit website. The loan approval rates of small businesses looking for financing from big banks ($10 billion+ in assets), local and regional banks and non-bank lenders (credit unions, Community Development Financial Institutions, micro lenders and others) is used.

What is Driving the High Numbers?

Record holiday retail sales were responsible for a 4.9 percent increase according to Mastercard. And the Small Business Report by ADP said the private business sector added 250,000 jobs for the month of December, with 94,000 coming from small businesses with 1-49 employees. Add the tax reform just passed by Congress and higher interest rates and the result is a lender-friendly environment for small businesses.

Biz2Credit CEO Rohit Arora said many of the economic indicators are performing well in the report. He added, “Businesses are anticipating that the tax form bill could help them, which gives potential borrowers more confidence to take risks. Meanwhile, lenders are closing deals and interest rates continue to trend upwards, which makes lending more profitable for them.”

The approval rate at small banks stayed the same at 49.0 percent for December as it did in November, while for the year the increase was 0.1 percent. And small businesses looking to alternative lenders saw their rates of loan approvals go down in December to 56.7 percent from 56.9 percent in November. For the year, these lenders also had fewer approvals at 56.7 percent compared to 58.6 in 2016.

Small business owners looking for loans in 2018 can be more optimistic than in 2017. Driven by higher interest rates, lenders see more opportunities to make money. And the business-friendly environment of the Trump administration is also giving small businesses hope as many of the regulations holding them down are being eliminated with executive orders.