Restaurant Owners Expect Higher Sales in First Half of 2018 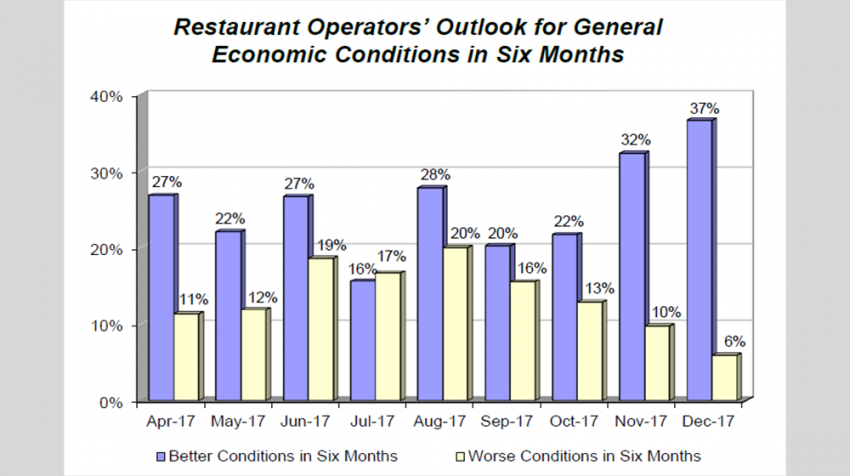 Restaurant operators are more confident about the business condition in the coming months. This is according to the latest National Restaurant Association’s Restaurant Performance Index (RPI) November report, released at the end of December.

The monthly index for November trended higher at 101.1 compared to October, which was at 100.9. The 0.2 jump is the same amount of increase the index reported in September when it was 100.7. The upward trend is indicating the first half of 2018 will be positive for restaurant operators of all sizes.

The majority of restaurants in the US are classified as independent small businesses. The National Restaurant Association reported there were a total of 624,301 restaurants in the spring of 2016, with independent units making up 331,469 and chains 291,794. The index report is especially important for small operators because it provides them with information about upcoming trends in the industry. With this data, they can make informed decisions about expanding or waiting for better conditions.

The index is an analysis of data gathered every month from more than 400 restaurant operators nationwide. The participants respond to the National Restaurant Association’s Restaurant Industry Tracking Survey on sales, traffic, labor and capital expenditures.

The index identifies 100 as a steady state level. When the index is above 100, it is an indication of a period of expansion, and if it is under 100, a period of contraction. The overall index number is derived from the Current Situation Index and Expectations Index to measure the state of the restaurant industry.

For November, the Current Situation Index stood at 99.6, up by only 0.1 from October. Even though this was the third month in a row with an increase, it still falls under the 100 level, which is a contraction.

The Expectations Index is generally always higher than the Current Situation Index, and it is no different for November. At 102.6, the index saw a 0.3 increase from October, resulting in three consecutive monthly increases. This has resulted in the highest level in nine months for the forward-looking component.

More Data From the Index

Restaurant operators reported stronger same-store sales and they are more optimistic about the business condition in the coming months. The number of restaurants reporting higher same-store sales was at 48 percent, and 46 percent said they expect to have higher sales in six months compared to the previous year.

The other half of the respondents experienced declines or stayed the same. For same-store sales, 37 percent reported declines, which was lower than October at 45 percent. As for their six-month outlook, nine percent expect their sales volume to be lower, while 45 percent said it will remain about the same. 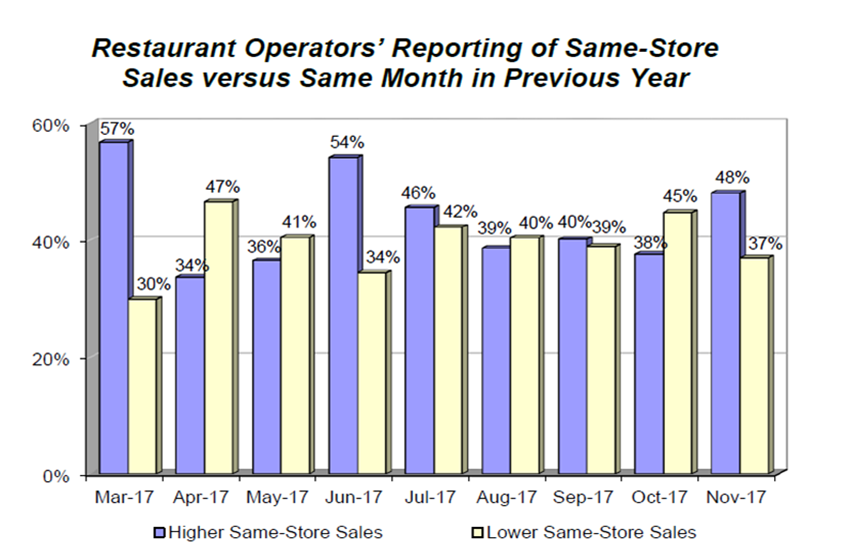 Value in Data for Small Businesses

Although the data about a high percentage of restaurants failing in their first year is more myth than fact, staying open beyond the first year means using the available information wisely. Reports such as the National Restaurant Association’s Restaurant Performance Index can be invaluable if properly used. These types of reports make you aware of past, present and future trends so you can see what is coming and not make past mistakes.

See Also: Baltimore Restaurant Opens its Doors to the Homeless