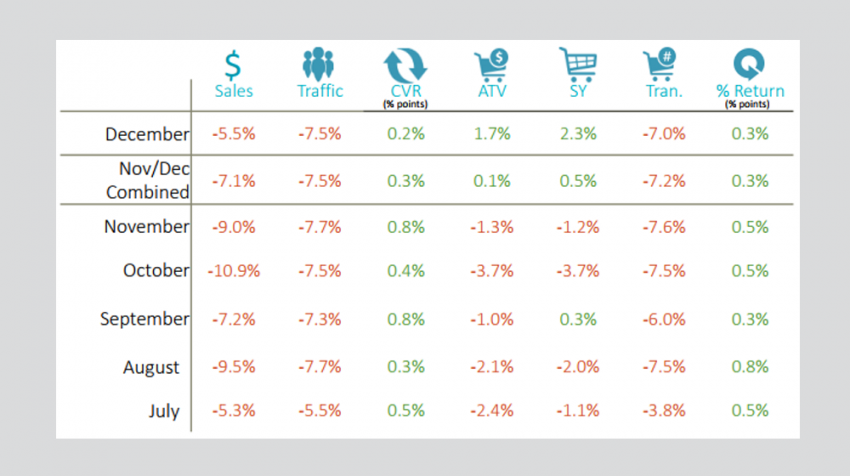 Nationally, December was a bad month for brick-and-mortar retail with sales dipping 5.5 percent below December 2016. Traffic also dropped 7.5 percent for these stores.

Even transactions dipped 7 percent, according to the latest Retail Performance Plus Year over Year Report for December from RetailNext.

One of the only bright spots was in the fact the number of returns dwindled in December to the lowest amount in the last six months.

The fact that Christmas fell on a Monday also had an effect on the numbers, the report says. Retail performed the best during the fifth and last weeks of the month because of the change.

Sales as well as traffic and transactions were at their highest on December 23. Sales transactions as a percentage of traffic was at its highest on the last Wednesday before Christmas.

Shopper yield and average transaction value peaked on Sunday, November 26 and Monday, November 27. Those same metrics were at their lowest on Tuesday, December 26.

Regionally, sales dropped in the Northeast by 6.9 percent with traffic declining 8.2 percent  over 2016. The Midwest had the biggest sales decreases at 8.4 percent, while traffic dropped 9.6 percent. Sales in the West had the smallest traffic drop, only 5.6 percent for December.

The South had a traffic drop of 9.2 percent for December. Sales declined in that region 4.4 percent.

The data for the Retail Performance Plus Year over Year Report for December was derived from measuring over 7 million shopping trips to retail stores across America.