Trump Addresses Small Business in State of the Union Address, But Leaders Say More is Needed 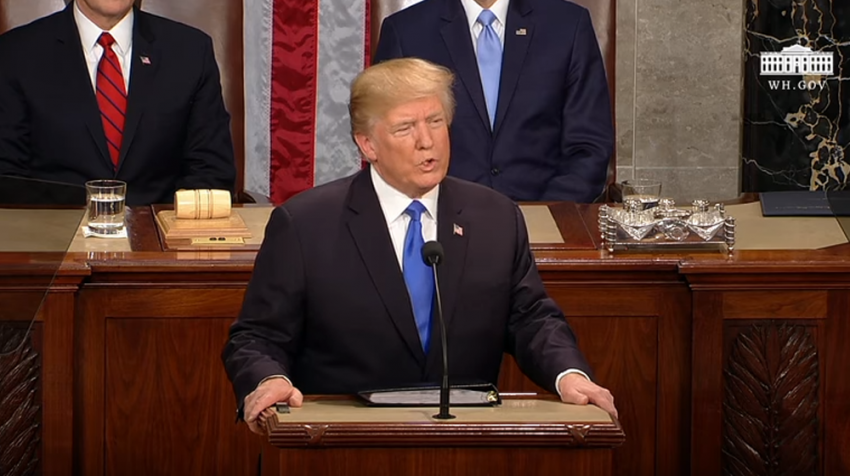 President Donald Trump noted small business and even invited two small business owners and one of their employees to sit with First Lady Melania Trump to watch the speech.

Trump delivered his first State of the Union address on Tuesday night and spent a large portion of that time focused on the economy. And while many small business leaders praised the administration’s efforts thus far, some also added more is needed.

Small Business in the State of the Union

Here’s what the President said during his State of the Union speech regarding small business:

Small business confidence is at an all-time high. And just as I promised the American people from this podium 11 months ago, we enacted the biggest tax cuts and reforms in American history. Our massive tax cuts provide tremendous relief for the middle class and small businesses.

Small businesses have also received a massive tax cut, and can now deduct 20 percent of their business income.

Here tonight are Steve Staub and Sandy Keplinger of Staub Manufacturing — a small business in Ohio. They have just finished the best year in their 20-year history. Because of tax reform, they are handing out raises, hiring an additional 14 people, and expanding into the building next door.

Keplinger and her brother, Staub, are co-founders of Dayton, Ohio-based Staub Manufacturing Solutions. They say that the policies Trump has pushed forward in his first year in office have revived their business and even made good on a promise to bring manufacturing jobs back to the U.S., to the benefit of their company, specifically.

Their company is a member of the National Association of Manufacturers and Keplinger and Staub met with Trump at the White House last year and in 2016. Trump also visited their facility in Dayton to hear what changes he could make to help small businesses.

“In welcoming NAM member manufacturers to the State of the Union, President Trump has once again demonstrated that manufacturing workers are at the center of his agenda and that manufacturers not only have a seat at the table in this administration, they also have the best seats in the House,” said NAM President and CEO Jay Timmons, in a prepared statement.

“Thanks to regulatory relief and tax reform, Staub Manufacturing Solutions is able to invest in its employees’ future with raises, bonuses, new hires and an expanded facility. Manufacturing workers are seeing the same good news every day at other companies across America. Small manufacturers are at the heart of the NAM and our industry. They are the strength of our economy and our country, and it is tremendously encouraging to have a President who is eager to recognize their contributions to the state of our union with the whole nation watching,” Timmons said.

Check out this video NAM produced ahead of the State of the Union to feature Staub:

In the time since the President visited the company, Staub Manufacturing has grown from 23 employees to 37. Prior to this, the company founders say they were struggling to make payroll.

Reaction from the business community was largely positive but called on Trump for more help for small business.

“In addition to highlighting the current high levels of small business optimism, President Trump correctly emphasized the importance of tax reform to business — something NSBA ultimately supported. However, NSBA continues to press for action on the pieces of the small business tax agenda left out of the most recent reform, the need to address tax complexity, parity among all forms of business, and  the looming U.S. debt.

“President Trump highlighted his plans to provide federal funds for infrastructure projects with an emphasis on innovation –something that ought to deeply involve the most innovative business sector in the U.S.: small business,” McCracken added. “Doing business with the federal government is an extremely convoluted process for small businesses, and any kind of broad spending initiative that seeks innovative approaches must make small-business involvement a pillar, and remove barriers to their participation.”

Small Business and Entrepreneurship Council President and CEO Karen Kerrigan echoed those sentiments. She largely cheered the speech but also called on Trump to open access to more funding for small business.

In her own statement, Kerrigan said:

“President Trump delivered a powerful address about the state of our nation and how pro-growth policies have lifted the economy and small business optimism. Building on his policy successes by advancing the next layer of small business priorities will fuel the dynamism and energy that our economy needs to extend opportunity and the promise of the American dream to everyone.”

Kerrigan added: “Several issues that small business owners want to hear more about include efforts to lower health costs, and improve access to growth capital and global markets. These are key areas that will boost entrepreneurship and small business growth. We look forward to working with the Administration and his team on these specific issues, as well as all of our priorities for small businesses and entrepreneurs.”

To counter that sentiment, Rep. Nydia M. Velázquez (D-NY), the leading Democrat on the House Small Business Committee, said Trump came up short for small businesses. In her statement to the press, received by email, Velázquez said:

“President Trump had a chance tonight to reach across the aisle, but instead opted for partisan rhetoric and empty promises. By failing to offer meaningful solutions to issues like immigration and infrastructure reform, the President yet again turned his back on America’s millions of small businesses.”

“In other areas, the President’s proposals tonight directly threaten our small business sector,” Velázquez said. “Immigration and entrepreneurship have long stood as twin pillars fundamental to American prosperity. Immigrants start businesses at rates double that of the broader population and, by demonizing immigrants, the President threatens to undermine what has long been a key ingredient to our economic success.”

She  added: “One thing is clear — America’s small businesses deserve a better deal. As lawmakers, it is our duty to cross party lines and develop lasting policies that ensure entrepreneurship remains the bedrock of the American dream. There was little substantive in tonight’s speech to suggest the President is ready to give our entrepreneurs the support they need to succeed.”

Did you watch or listen to Trump’s State of the Union?

You can watch the full address here:

What were your reactions to the speech? Let us know in the Comments section below.