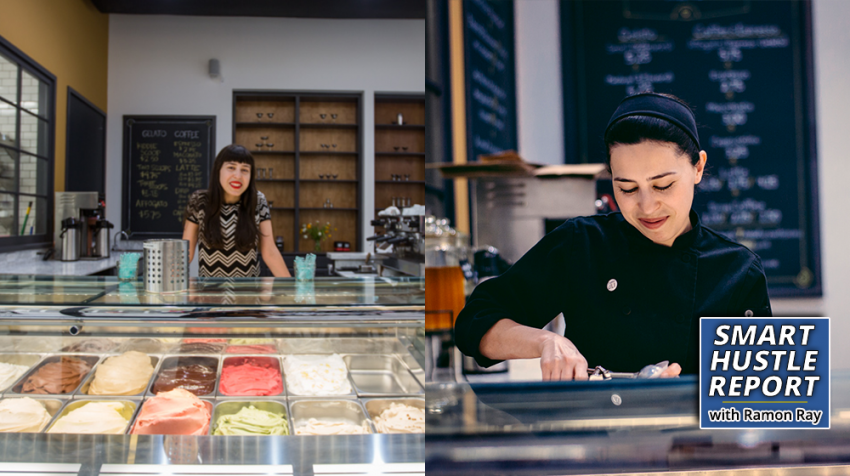 Going from investment banking to scooping gelato isn’t a very common career trajectory. But it’s exactly what Uli Nasibova did.

The founder of Gelateria Uli recently spoke with me as part of our exclusive Smart Hustle Report. During the conversation, Nasibova offered some thoughts on scaling a business as well as how her career in finance has actually helped her grow a gelato business.

“Everything that I learned there I’m using today,” says Nasibova.

Nasibova originally came to the U.S. as an international student from Baku, Azerbaijan. In school, she studied languages and mathematics, which led to her career as an investment banking analyst. She spent about eight years working in that industry in Los Angeles, before realizing that it simply wasn’t her passion.

It happened to be around that same time that Nasibova also noticed a major lack of frozen dessert options in her neighborhood of downtown L.A. A major fan of ice cream, gelato and other frozen sweets, she figured this would be the perfect opportunity for a career change.

You can hear about her entire journey by listening to the full interview below.

Here are some of the top pieces of wisdom from the conversation.

Make Sure All Aspects of Your Business Come Together

Jumping into business ownership can be scary. So you need to do a lot of planning before you take any significant risks. In Nasibova’s case, she simultaneously worked on recipe creation, a business plan, finding the right equipment, and business research before quitting her day job.

She explains, “Not all your friends who like making cupcakes should quit their day jobs and open a cupcake bakery shop. But there was something about that [situation] that in my case made sense, and I just went headfirst into it and made it happen.”

Tips for Growing a Small Business

Growing a business can be just as difficult as starting one. Gelateria Uli started with just one retail space with a production kitchen attached. But Nasibova recently added a second location, a move made possible because the equipment at her production facility could already handle the workload.

Nasibova says, “I have this wonderful production facility that can take on three gelato shops. I have the one that’s attached to it and the second one that I opened. And who knows, maybe there will be a third one. I’m not mentally ready for it yet, but I have the capacity.”

Delegate as You Scale

Another important aspect of scaling is to find great employees who can help to support your mission. Nasibova says the first step should be to find just one person who can handle one aspect of your business better than you can.

She says, “When I first started out and I was small and I was one shop, I could make the product, I could scoop it, I could count the till, I could do my bookkeeping, entering my receipts, do my taxes. I could manage it. But there’s an expiration date to anything. And as I learned, as I was growing, as my revenue was growing, I found that the best thing I could do, not even for me but for my business, was to delegate.”

Ramon is an entrepreneur, best selling author and global speaker. He is the founder of Smart Hustle Magazine. You can read more about Ramon.