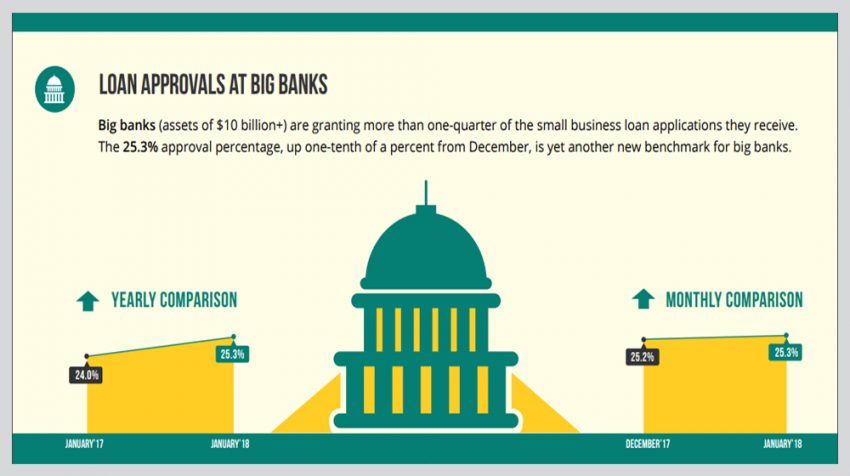 The optimism small business owners feel about the economy is highlighted by the increase in the volume of loan applications and approval rates from lenders. The Biz2Credit Small Business Lending Index for January 2018 reveals big banks hit new highs, continuing into the new year the 1.3 percent growth it delivered in 2017.

Big banks, which are described as firms with assets over $10 billion, are approving more than a quarter or 25.3 percent of the applications they process. The new number is an increase of one-tenth (0.1) of a percent over December 2017. Other lenders also experienced similar 0.1 percent gains or drops or didn’t see any changes.

The strong fundamentals in the economy, low unemployment rate (4.1 percent), higher wages, and record stock market numbers (minus the recent hiccup), have encouraged small businesses to look for growth opportunities. This has resulted in more applications being submitted for loans and more lenders approving these requests.

Biz2Credit CEO Rohit Arora, who oversaw the research for the index, said, “With the economy showing such good signs, the number of small business owners applying for loans has risen. They are showing confidence and are willing to take risks.”

The numbers for small bank approval rates are almost at 50 percent, coming at 49.1 percent for January, up by 0.1 percent over December. Institutional lenders have been above 60 percent for some time, and for January they came in at 64.3 percent of loans appproved, the same as the previous month.

Alternative lenders and credit unions both showed a drop of 0.1 percent, coming in at 56.6 and 40.3 percent respectively. In the case of alternative lenders, the index reports they has been slowly declining for almost two years, except a November 2017 uptick.

The lenders in the index point out the different needs small businesses have when it comes to obtaining funding. This explains the contrast in the numbers between big and small banks, as well as other lenders. Small banks (offering SBA loans), alternative lenders and credit unions address the needs of startups and business owners who don’t qualify for traditional term loans from banks.

Big banks and institutional lenders, on the other hand, are more stringent, but they are still an important part of how small businesses get funded.

The Biz2Credit Small Business Lending Index was compiled by examining more than 1,000 loan applications on Biz2Credit.com.