What’s the Difference Between Celebrities and Influencers – and Which Does Your Brand Need? 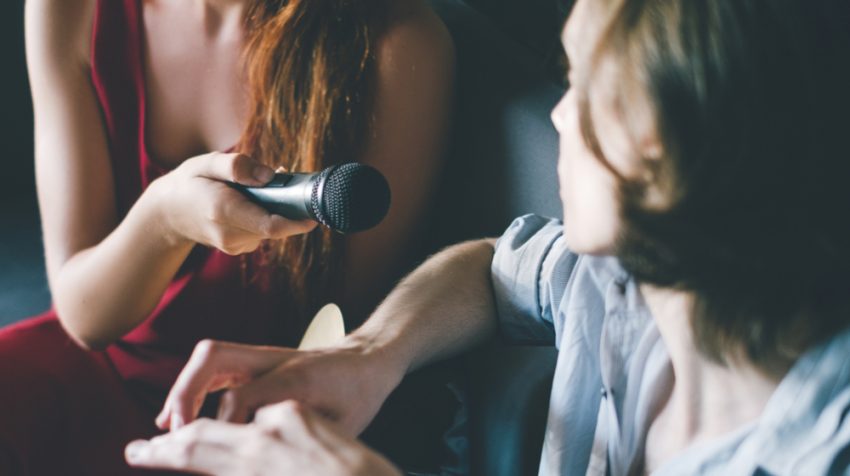 For the past couple of years, influencers have played a major role in promoting brands — both locally and internationally. While some marketing campaigns solely relied on influencers, I noticed that many brands used influencers alongside traditional celebrities. At the same time, I also noticed that more and more businesses are taking a risk to invest in influencer marketing.

This led me to believe that brands are increasingly relying on influencers, and may eventually prefer them over traditional celebrities. I believe in 2018, we’re going to see influencers prevailing in the marketing landscape, and overtaking celebrities.

So I decided to run a poll on Twitter, asking people whom they think will be the winners in 2018 — influencers or celebrities. Here are the results: 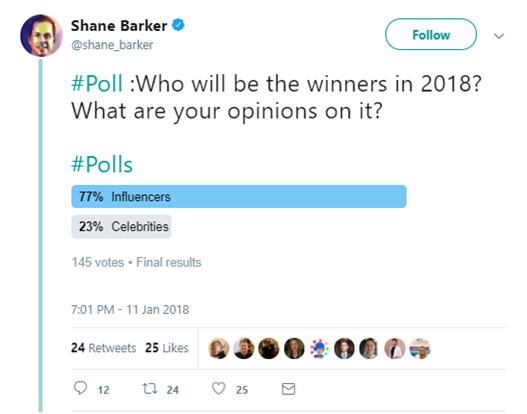 In this post, I will do a thorough breakdown of the differences between celebrities and influencers. I will also make a case for each of them, and explain why influencers have the winning hand.

What’s the Difference Between Celebrities and Influencers?

What we know is this — both celebrities and influencers have a massive social following. So it’s no surprise that people sometimes confuse the two. The simplest way to differentiate between an influencer and a celebrity is the channel through which they built their influence.

Celebrities built their influence through traditional channels such as television, radio, magazines, etc.

For example, Selena Gomez, who has the most followers on Instagram as of now (132 million), is a traditional celebrity because she is a singer who gained influence through television and radio.

On the other hand, influencers built their influence through non-traditional media channels, mainly social media, blogs and vlogs.

For example, the most popular YouTuber, PewDiePie, who currently has 60 million subscribers, is an influencer because he gained influence through YouTube. 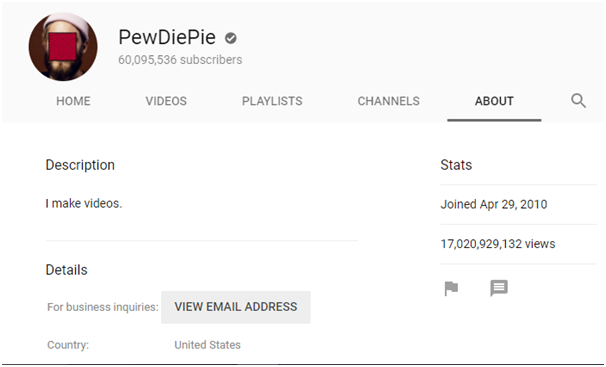 Celebrities generally gain their following because people admire their talent and enjoy their music or movies. Influencers, on the other hand, tend to gain their following in a specific niche by creating content relevant to that niche. They tend to have expertise in the niche or are highly interested in the subject. So you’d have influential food bloggers creating content related to food, such as original recipes, cooking tips, etc.

PewDiePie built his following by creating vlogs and commentaries mainly in the entertainment and gaming niche. His following would be comprised of people who are interested in gaming and admire his sense of humor.

The Case for Celebrities

Now although I’ve mentioned earlier that influencers will prevail in 2018, that doesn’t mean working with celebrities is useless. Regardless of their credibility, celebrities still offer massive exposure. And in most cases, their reach extends to all demographics.

For example, you’d have a movie star whom people across all age groups, income levels, geographic locations, etc. look up to. Of course there will be a larger concentration of certain demographics among their audience. But in general, they would be able to reach a more varied audience than influencers.

Let’s take a look at the audience demographic of TV persona Jimmy Fallon, for example. A Zoomph analysis shows he has almost equal amounts of male and female followers. Fifty-two percent of his audience consists of females, while 48 percent consists of males. And although 61 percent of his followers are millennials, he also has significant reach among Gen X-ers.

See Also: The Difference Between Marketing and Advertising

Now let’s take a look at the audience demographic of NikkieTutorials, a highly popular beauty influencer with 8.7 million YouTube subscribers. According to a Zoomph analysis of her Twitter profile, a majority of her followers are female (87 percent). Her reach mainly extends to millennials and a few Gen X-ers. Whites make up the majority of her follower base, followed by Hispanics.

This goes to show that she can reach a very specific demographic — white millennial females who are interested in beauty tips and products. As a result, she would be highly suitable for brands relevant to the industry. But she might not be the perfect channel for promoting more mainstream consumer products such as snacks, energy drinks, etc.

These examples show how traditional celebrities tend to have a more massive reach as compared to social influencers. Millennials tend to dominate the audience demographic of most celebrities and influencers. But when comparing the two, there tends to be a more balanced age distribution among the followers of celebrities.

The biggest value a celebrity offers is the level of exposure he or she can provide. Celebrities don’t necessarily have to have knowledge or credibility in a specific field because they’re already famous. Additionally, brands partner with them for their personality and not for their content creation or creativity. So if a brand is aiming for mainstream exposure without targeting a specific niche, celebrities would be highly valuable.

The Case for Influencers

Influencers may not help you reach the masses, but what they can do is reach a highly relevant audience. Therefore, they can be said to provide mass impact. Let’s take a closer look at some of the top benefits of working with influencers, which celebrities cannot provide:

One of the most outstanding features of influencers is that they are highly relatable. They are just like regular people, everyday consumers like their audience. Due to this factor, they can easily help set your brand apart when you choose to work with them.

Celebrities tend to be more out of reach, as they often present personas that have been carefully constructed for the public. So they do manage to win the admiration of the masses. But although people idolize celebrities, they can’t really relate to them.

Influencers like Markiplier, for example, do not hesitate to share bad pictures of himself with his followers. We all know that not everyone is perfect and we can sometimes have bad photos of us. This is just one example in which the influencer shows his audience that he is a real person just like them. He consistently maintains his goofy image, which is not only entertaining to his audience but also relatable. 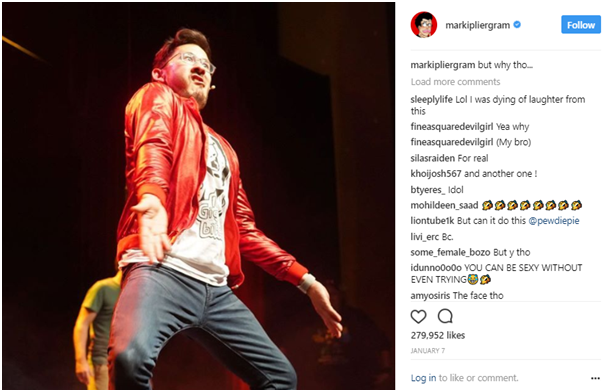 In addition to this, influencers are more reachable for brands as well. While you’ll have to go through a strenuous process of talking to a celebrity’s publicist for endorsement, you can personally connect with influencers for sponsorships. Tools like Grin.co have even made it easier for brands to make and maintain direct contact with influencers.

Influencers built their influence by creating quality content in the relevant niche, proving that they are excellent content creators. They put time and effort into coming up with content ideas and then turning those ideas into content that their audience can consume.

Celebrities, on the other hand, only have their personality and reach to offer brands, as mentioned earlier. So while you can have their face in the promo shoot for your product, it may not be the best idea to rely on them for content creation. The best thing they can do is tell their story about how your product has helped them in some way or the other. But if you want to win the audience’s trust, the story has to be authentic.

Influencers create content in their own voice, with an angle that will appeal to their audience. They can create blog posts, videos, social media posts, etc. to promote your product while ensuring that the content resonates with their audience. They know how to infuse the product into their content in such a way that it doesn’t deviate from their usual posts.

YouTuber Jack Douglass, also known as Jacksfilms, is an excellent example of one such influencer. If there’s any brand sponsoring him, he will find a way to fit their product into his daily YIAY (Yesterday I Asked You) videos. For these videos, he would ask his followers a question, and then compile their answers to showcase his audience.The YouTuber once asked his followers to help fix his wedding website using Squarespace. He then showcased some of the submissions in his next YIAY video, which ended with him promoting the website. He took care to mention that all the submissions he showcased were created using Squarespace, and even provided his viewers with a 10 percent discount code. 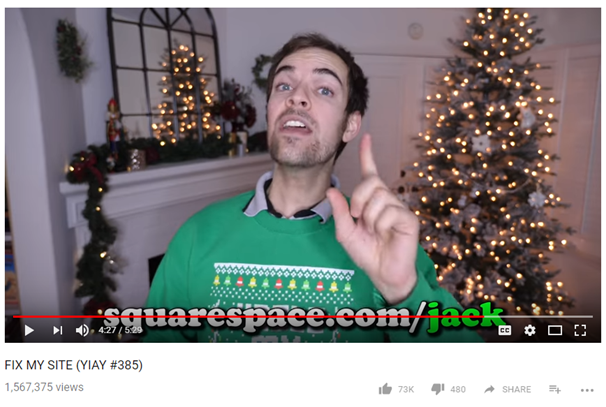 As you can see, the video has since been viewed more than 1.5 million times. Out of all these views, there were only 480 dislikes. Jack’s tactic for promoting brand sponsors is ingenious in that he’s very honest and doesn’t try to hide the fact that he’s working with these brands. In fact, there’s a running joke in his fanbase about how he always talks about “today’s sponsor”.

They Have a Highly Relevant Reach

Another notable aspect of working with influencers is the ability to reach a relevant audience. Although they may not be able to reach the masses, influencers can appeal to a niche audience.As mentioned earlier, influencers tend to either specialize in or have keen interest in a specific niche. Therefore, they create content relevant to this niche. And the audience they attract is also comprised of people who are interested in the subject.

So choosing the right influencer will help you reach a significant amount of people who are highly likely to be interested in your product. 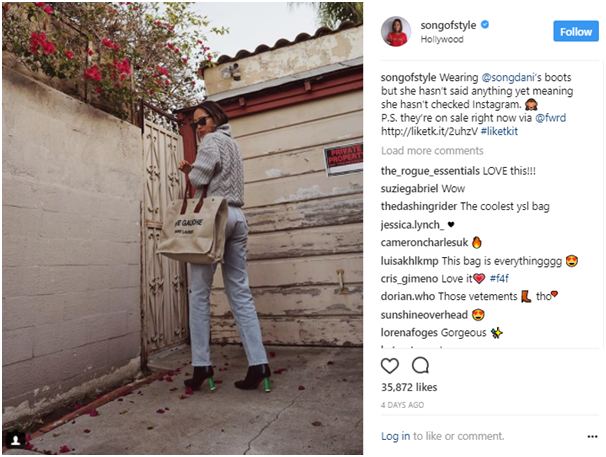 According to the Webfluential Influence Estimator, celebrities like Selena Gomez may charge anywhere between $49,000 and $60,000 for just one tweet about your brand. 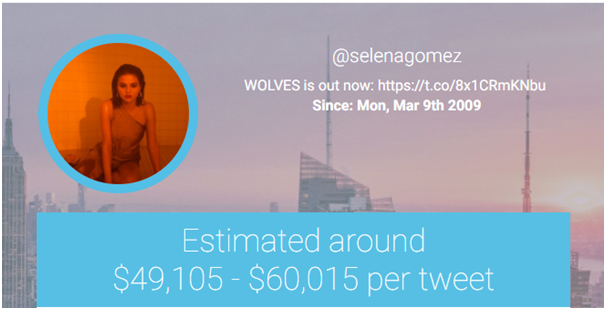 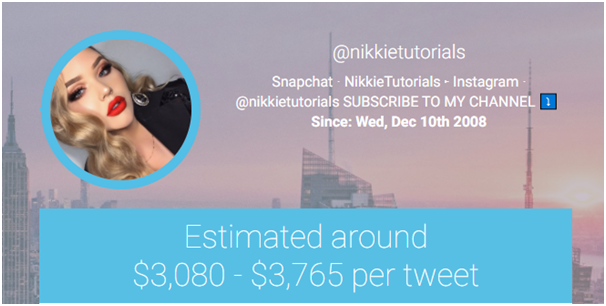 These numbers clearly show that celebrities are way out of reach for businesses with smaller budgets. Even for those who have the budget, it may be much more beneficial to work with several big influencers in the relevant niche to reach the desired audience.

So I’ve clearly explained how influencers can benefit your brand in ways that celebrities cannot. Although celebrities have their own set of benefits, the overall impact of influencers is more desirable for most businesses. Based on these points, there’s no doubt that influencers will dominate the marketing landscape in 2018. Do you agree? Feel free to share your thoughts in the comments.