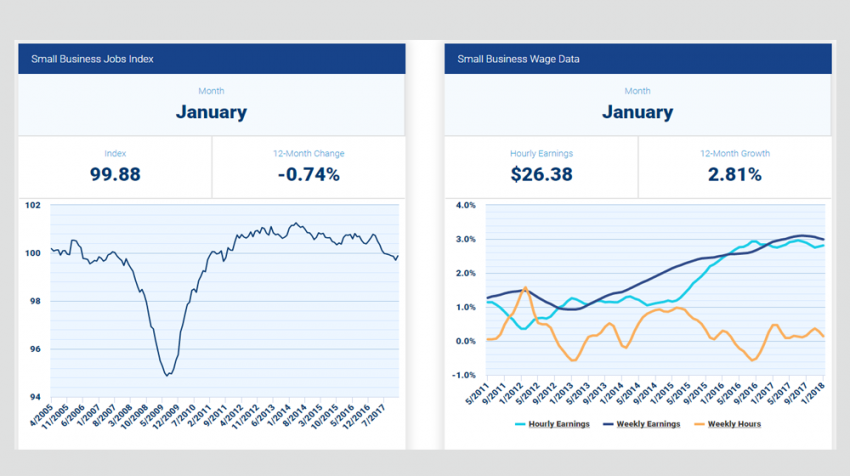 Small business job growth and wages increased in the first month of 2018, according to The Paychex | IHS Markit Small Business Employment Watch. While The Small Business Job Index was below the break even point of 100 at 99.88, it still marked a small increase over December of 0.18 percent. However, January’s job growth rate is down compared to this time last year by 0.74 percent.

The year-over-year growth rate for wages in January was 2.81 percent, an improvement over December’s 2.78 percent. Hourly earnings are up 0.72 percent over last year, to $26.38.

“After an extended period of uncertainty, the passing of federal tax reform at the end of last year offered clarity to business owners on the immediate future of U.S. tax policy,” said Martin Mucci, Paychex president and CEO in a release.

Regionally, the Midwest jobs index placed over 100, moving 0.47 percent in January alone. At the other end of that scale, the West has the lowest index regionally (99.43) and the weakest monthly and yearly growth rates at 0.09 percent and -0.74 percent, respectively.

Virginia had a large decrease of 0.40 percent in January and Missouri’s index was the weakest at 98.32. Denver’s index at 103 placed it at the top for metros.

Phoenix is the best metro for hourly earnings growth at 5.15 percent , with San Diego, Riverside and Los Angeles rounding out the next positions. Hourly earnings climbed in the financial services and construction industry, with a slight uptick in manufacturing.

The report draws on the payroll data of approximately 350,000 Paychex clients. The Small Business Jobs Index uses payroll data from businesses with fewer than 50 workers with 100 being the break even point for growth.