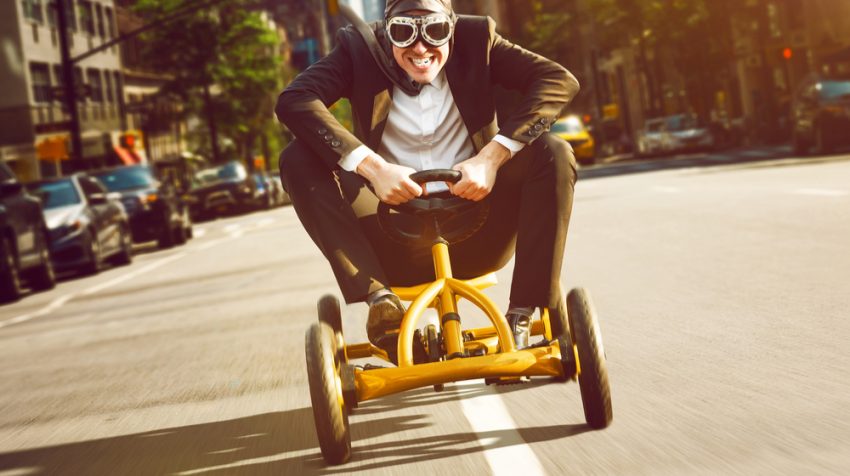 I think people who start companies are, without a doubt, just a little bit crazy.

And people who start more than one company? Deranged lunatics – all of them!

Why? Because it’s insanely hard!

You’re signing up for a ridiculous amount of work.

But I also think you have to be crazy to start a company.

Your startup journey will be the wildest ride of your life.

Why People Who Start Companies Are Crazy

Here are seven reasons why.

1. It Takes A Ridiculous Amount of Work!

You know, when you sell your company for millions or billions of dollars and money rains from the heavens.

Here’s the reality about being an entrepreneur:

It takes a ridiculous amount of work before you get anywhere close to that dream scenario.

Starting your own company means sacrificing your own time to build your company. It’s a full-time commitment. Expect many long days and long nights.

See Also: Use These 5 Financing Options for Your Bootstrapping Startup

2. You Must ‘Dream While Awake’

Statistically, the odds of success aren’t in your favor.

Only 25 percent of venture-backed startups succeed.

Despite the awful odds, you unwaveringly believe in success. There’s huge power in delusional thinking!

The first company I founded? It almost failed. Twice.

Thankfully, that company survived. It eventually became profitable and continues to thrive today.

To survive, you need to be able to project an unbelievably (albeit unrealistic) great future.

Craziness is required to project that ridiculously bold vision and the enthusiasm to match.

This is what enables you to attract the team and investors you’ll need to make your delusion a reality.

3. Raising Money for Your Startup Is Challenging

I pitched more than 100 VC firms for the first company I founded. I got a dozen meetings.

It almost took me two years to raise a Series A round.

Even when you do get a meeting, you’re going to run into some skeptical VCs.

Unless you have a proven track record in the startup world, it can be incredibly hard to lure talented people to work for you.

Why would someone risk leaving a steady good job to believe in your crazy idea?

However, you should never settle because there’s a lack of available talent. You need to hire the best person for the job – someone who will help grow your business.

Here are three questions you should ask to weed out the good candidates from the bad:

5. Being Boss Sounds Great, But…

So you think you’ll be your own boss?

You’ll quickly discover that, although you’re “the boss,” you really aren’t in control of your company.

If you have investors, you’ll quickly discover they’re more demanding that any boss you ever had.

And let’s not forget about your customers. Think they aren’t really in charge? Think again! They’re probably more demanding that any of your old bosses or your investors!

Being the boss isn’t glamorous. You’ll probably actually lose freedom and have more responsibility than you ever could have imagined.

If things go south, your company can always pivot and everything will be OK, right?

Although pivots have been made to sound cool, really it’s just a way of saying, “Oops, my vision didn’t match reality.”

Your investors and employees will lose confidence in your leadership. People will either start tuning you our or quit.

There’s little margin for error when you start your own company.

7. You’ll Do Less of What You Love

Being the founder means doing less of what you love.

For example, if you love coding, don’t expect to do much (if any) when you’re the boss.

You have to hire people who are better than you at what you love to do those things. Then you have to nurture and lead that team.

You have an entire company to run. That means inevitably sacrificing working on those things you’re most passionate about.

Here’s to the Crazy Ones

Yes, we may all be crazy. As an old Apple ad reminds us, we should celebrate being one of the crazy ones:

“Here’s to the crazy ones. The misfits. The rebels. The troublemakers. The round pegs in the square holes. The ones who see things differently. They’re not fond of rules. And they have no respect for the status quo. You can quote them, disagree with them, glorify or vilify them. About the only thing you can’t do is ignore them. Because they change things. They push the human race forward. And while some may see them as the crazy ones, we see genius. Because the people who are crazy enough to think they can change the world, are the ones who do.”

We’re willing to risk money, failure, and our reputation.

We’re willing to feel uncomfortable all the time.

Would you rather have it any other way?

If your answer to that one question after reading this article is “no,” then congrats! You’re crazy! It’s time for you to go start your company!