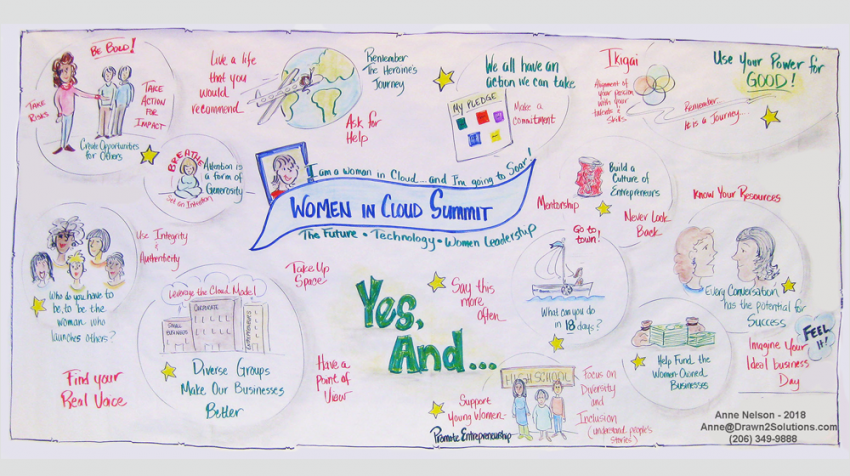 A new movement is afoot in the tech industry. A group of women in leadership roles in companies like Microsoft, Hewlett Packard Enterprise and Meylah have banded together to form the Women in Cloud network, a group dedicated to supporting women entrepreneurs and professionals in the tech space through a number of different initiatives.

Recently, the group hosted its first Women in Cloud Summit event on the Microsoft campus in Redmond, Washington. The inaugural event featured nearly 400 attendees, mostly women. And the founding team made a few announcements, including a new accelerator and pledging system.

Many of the founding members met through their involvement with IgniteWA, an economic initiative aimed at supporting small businesses in the state of Washington. But even though IgniteWA does have some initiatives aimed at improving diversity, the group felt that the issue of supporting women in tech was important enough to warrant its own entity.

Gretchen O’Hara, co-founder of Women in Tech and VP of Marketing for One Commercial Partner at Microsoft told Small Business Trends, “Women start 40 percent of all new businesses. But only 5 percent of those new businesses are tech startups. So there’s a huge opportunity for women small business owners to give back and think about how they can transform their businesses in the cloud.”

So the founding team came together to create Women in Tech, an organization that’s still in its beginning stages, but that also has several initiatives already in the works. Here’s a bit about the different areas of focus for Women in Cloud.

One of the biggest announcements is the creation of a new accelerator program for women-led companies looking to grow their businesses using cloud technology. The program is supported by Microsoft and Hewlett Packard Enterprise and includes a six-month cloud accelerator lab experience in Seattle.

To qualify, applicants must have at least one woman on the founding team, use cloud technologies to build a recurring revenue model, have interest in developing value-add solutions using cloud technologies, and be interested in using Microsoft and HPE channels to grow their businesses.

Once selected, companies will have the opportunity for one-on-one coaching, a free migration to Microsoft Azure, the opportunity to attend investor workshops, and special pricing for partner services. Even once the initial program is complete, the team hopes it will start to have a ripple effect through the industry.

O’Hara says, “The hope is that we can start with the first set of female entrepreneurs, get them ready to do the hard work, roll up their sleeves and do some heavy lifting to get through the program. They’ll have all the resources, mentorship, software and services available for them to accelerate their growth in the cloud. Then once we graduate that class, the hope is that they’ll be able to go back and reconnect with others and support even more women owned businesses going forward.”

The founding team also hopes to inspire action from others in the industry, even from those who might not be able to take advantage of the accelerator program. Part of their strategy for doing so is to collect pledges of real actions from people in the industry which they can take to improve diversity and inclusion in their own organizations or the industry as a whole.

The idea stems from an earlier experience of Wendy White, another of the founding members of Women in Tech. Years ago, White was struck an incident raised in a company she was working for at the time. A colleague chose to leave the company after many complaints of the “bro tech” culture which wasn’t known as being super friendly to women. It was also in the midst of the gamer-gate controversy and plenty of other conversations surrounding the difficulties of being a woman in the tech space.

White says of that time, “I thought, ‘I’m the most senior woman here – I’m it.’ So I felt that I had to take action — I couldn’t just talk about it. So I started a women’s mentorship network inside the company.”

And now she and the rest of the Women in Cloud team want to inspire others to take similar action through a pledge system.

White explains, “We don’t want it to just be a conversation. Everyone knows the diversity numbers and the importance of inclusion. But we want to take that to the next step. What can we actually do to catalyze our network? Can we kick in money for a scholarship, agree to be a mentor for other women?”

White spoke at the recent Women in Cloud Summit about the idea, asking other attendees for pledges of actionable things they could do to enable and support women owned businesses and women professionals in the tech space. The original goal was to collect 100 such pledges over time. But White says that she received about 50 right away, so she’s hopeful that they will be able to go beyond that original goal.

The team is in the midst of setting up a system for pledging on its website. But for now, White encourages business owners and others interested in pledging to email her directly with their ideas.

One potential course of action for those looking to support women in tech is to create opportunity circles that help to connect women with mentors and industry opportunities. And the Women in Cloud team is also promoting this idea with its own network of mentors and advisors.

Carrie Francey of HPE and Women in Cloud told Small Business Trends, “The idea is to impact and help others navigate the way to finding funding or making that process easier with tools and resources and people who can help by mentoring or sharing their individual skill sets.”

The idea behind these circles would be to have small groups that have both experienced mentors and women looking to grow their businesses or advance their careers. These groups can meet and help expand each other’s networks and provide guidance and opportunities to the other members of the group.

You can sign up on the website if you’re interested in joining the Women in Cloud network. Both men and women are invited to be part of the mentorship and coaching network.

These are just a few of the issues that were discussed at this year’s Women in Cloud Summit, which took place on January 19. The event also featured speakers from Microsoft, HPE and other tech giants, along with educational exercises and roundtable discussions.

Both men and women were invited to attend. However, the majority of attendees were women, which is a major outlier in the tech space.

Overall, the team was pleased with the event and hopes to continue it, along with the plethora of other initiatives they have in the works, well into the future.

O’Hara says, “We don’t just see this as a network or an initiative — it’s really a movement.”