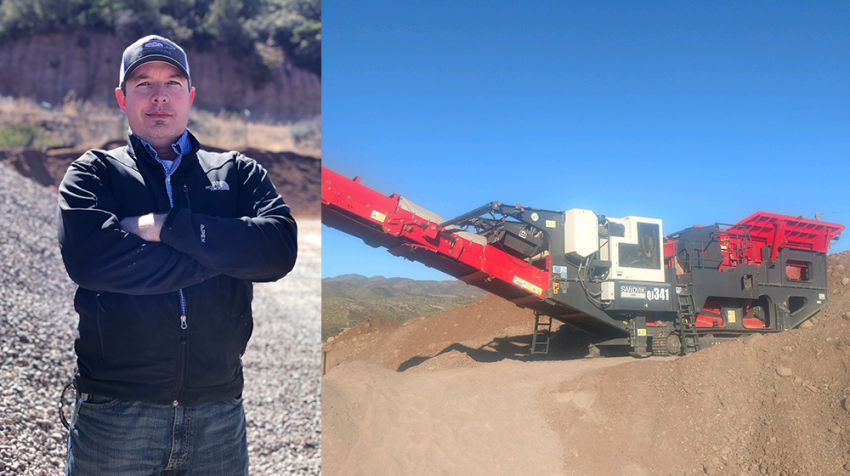 Entrepreneurs should never be afraid to be the first to try something different or to come at problems from  a different direction. Tonto Rock Products LLC has made a success of it as the first Native American Disadvantaged Business Enterprise (DBE) to be certified for sand and gravel manufacturing. But that’s not the only example of how the company is reinventing the small construction business’s success story.

When Ames Construction awarded the Arizona firm a large contract recently, it marked the high point in a year where the company scored a number of important projects.

Small Business Trends spoke with Forrest Gressley, president of Tonto Rock Products, about how the company achieved its success and the challenges it faces going forward.

Gressley characterizes his company’s success as a sort of David and Goliath story.

“One of the unique things that we’ve done is get our certifications in industries that were typically dominated by large corporations,” Gressley said.

Like a lot of other successful entrepreneurs, Gressley saw a unique opportunity. He saw a niche where he could supply the materials contractors need for heavy highway projects with his family owned business — a federally certified mining pit.

But there was another piece of the puzzle.

“I’ve got a native American background. That, and coming out of the economy that we just did, I decided that every advantage that I could find I was going to utilize,” Gressley said.

That led him to research the DBE program. The federal program is designed to combat discrimination in federally-assisted highway and other contracts across the country.  Gressley quickly saw an opportunity to give his company an edge.

“We couldn’t afford to go out and buy massive pieces of property and spend hundreds of thousands of dollars getting them approved,” Gressley said. “Yet we have native American tribes all throughout Arizona that have vast undeveloped resources.”

He spent the next two years pitching the idea to contractors and developing the business model further.

“They fell in love with it and that’s translated into the successes we’re having right now,” Gressley said.

It all started during the economic collapse when Gressley inherited the family company and started looking for a new direction to take the enterprise. He decided the best way to utilize the family resources was to take the reigns himself at that difficult time. Previously the company had sold its interests in mining operations and taken a royalty.

“It was pretty tough at first but I started developing, and rather than taking another entity on, I decided to do it all myself in-house,” Gressley added.

He spent most of the next year working to get his business up and running. He built an entire manufacturing facility by himself and calls it one of the hardest things he’s ever had to do.

One of the other challenges Gressley faced from the beginning was one particular requirement in the DBE program. To get certified, a company needs to already be operational. A proposal or business plan won’t get you in the door. And the program is needed to gain certification to participate in Department of Transportation (DOT) assisted contracts.

He’s got the contracts (over $10 million worth by his estimates) but struggles to finds the capital to fulfill them.  He also says locating the capital to fund overhead costs for the operation has been next to impossible. It’s a familiar problem for small businesses faced with tight bank restrictions on lending.

However, there’s a bright side. Gressley’s hard work and perseverance has paid off and caught the attention of at least one client willing to pay on a weekly basis to help the company build up its reserves.

“Lack of capital is a problem that a lot of small businesses and DBE’s are facing in the industry right now,” Gressley says. “A lot of big corporations are needed to do unique things like this to keep small businesses funded and working.”